You are here: Home / Featured Home / The Silent Power of Mirroring: Connect With Your Team On and Off Site

Have you ever yawned after seeing someone else do it first? This isn’t a coincidence – rather, this is your body responding to what others are doing around you.

It’s mirroring what it sees other people do. The more empathetic you are, the more likely you are to be a part of contagious yawning, according to ExecutiveCoachingSanFrancisco.com. So when you mirror other peoples’ actions, you’re showing empathy. And as leaders know, this is a critical management tool. 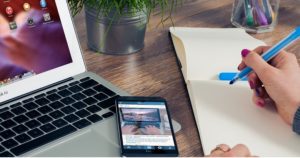 Sure, some of us do this automatically. For example, everyone in a meeting may have their hands folded and on the table.

But when you use conscious mirroring, it becomes a successful communication tactic. It shows your team you’re on the same page, meaning they can relax and openly share information with you.

Mirroring can be used:

Each situation comes with its own techniques. After all, you’ll need a different process when you’re talking to someone face-to-face than when you’re on the phone.

For example, let’s say an employee comes into your office to talk. He instantly sits back in his chair – so if you leaned forward in yours, he’d likely feel tense and intimidated. Rather, if you sit back, you’re showing him empathy and signally that you’re responding to what he needs.

“We often express interest through raised eyebrows, smiles, head nods, vocal utterances (like ‘uh-huh’), and leaning forward. If you don’t give feedback physically, people think you don’t care, that you’re stuck up, and host of other negative attributes,” says Patti Wood, a body language expert and author of “SNAP: Making the Most of First Impressions Body Language and Charisma.”

Goes to show, responding to the person’s body language will pave the way for open, honest dialogue.

So if your only communication with an employee is over the phone, how can you give off the right body language cues through mirroring? Pace the discussion.

Basically, you replicate the other person’s pace and communication style with your voice. That means if the person is talking slowly, adjust your voice to a slower speed. Keep an ear out – literally! – for tone, style, rhythm and tempo and adjust accordingly. You’ll find it puts the person at ease and helps you build rapport.

“If you were to watch the conversation on a video, it might look like you’re dancing with the other person. If you don’t ‘dance’ with your teammates it can make you look like you’re not interested in what they’re saying, you’re not a good team player, or, in extreme cases, that you’re lying,” Wood says.

When you place yourself in someone’s “mental shoes,” you’ll be able to connect with that person on another level. Not only will mirroring signal that you empathize with the feelings of others, it’ll also build that feeling of collaboration every team needs.