We’ve all been participants (victims?) of tried and-true teamwork-building exercises that are meant to put everyone at ease (they rarely do), “break the ice,” introduce people and kick off projects. Most of them are somewhat entertaining and do have the effect of getting everyone’s mind off their overloaded schedules.

But do they really encourage teamwork? And when we do promote team spirit, how do we avoid sounding like a cheerleader? 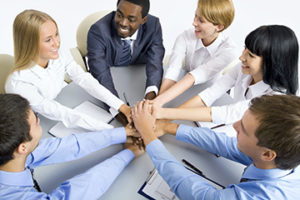 The trick is to use teamwork activities that not only get (and keep) those involved interested, but also end up teaching you and your team something they can use for the future.

To really promote the notion of workplace camaraderie, you’ve got to be on your creative toes to think of memorable ways to get your team to buy in to the idea.

When morale is drooping, it may be time for a quick round of team-building exercises, says Elizabeth Archuleta, a diversity and inclusion consultant based in Phoenix. Just an afternoon’s worth of participation can go a long way toward refreshing your work group’s sense of shared purpose.

Here’s four of the best ideas (and there’s no rah-rah involved):

1 Do a Group Résumé: Archuleta says creating a group résumé is a clever way for team members to get to appreciate what everyone else has to offer. Participants divide into small groups. On a flip chart, each group creates a résumé that includes such categories as education, total years of professional experience, positions held, skills, accomplishments, languages, hobbies, and talents. Then, each unit presents its résumé to the entire group. The benefits (other than giving everyone a chance to brag a little!) focus on what each employee can bring to the table that could make everyone’s job easier.

2 Make a Game of It: You may have heard the adage that you can tell a lot about someone by the way he or she plays Monopoly. Using games as work ice-breakers can reveal traits of leadership, analyzation, deduction and risk-taking in employees. In Response of the Brain to Enrichment, neuroscience researcher Marian Diamond described how game-playing can shape the cerebral cortex — the area of the brain where the highest cognitive processing takes place. Have each team member bring his or her favorite game in and take turns playing every once in a while; say, after a short meeting or during a monthly luncheon. A bonus: Games can also be an effective way to relieve stress—which can lead to more relaxed and adaptable employees.

3 There’s No Place Like Work: What do most of the top-rated companies to work for in the U.S. have in common? They make their employees feel right at home. They may not endorse a robe-and-slippers dress code, but they encourage employees on occasion to have pot-luck lunches, hold book-swaps, bring their pets in (while first considering any co-worker allergies), and other such “domestic” habits. It might seem counter-productive to get employees’ minds on home rather than on work, but stats show adding a nurturing feel to the workplace makes people more comfortable in it.

4 Walk in Another’s (Job) Shoes: Everyone on your team has specific tasks and duties, but to promote better teamwork, why not let them try someone else’s duties on for size? Again, this is one practice that might seem counter-productive at first. But it promotes working well together by letting each employee understand others’ work more fully. Most important—it can spark a new appreciation from employees about what their counterparts might face and deal with day to day.

How about your teamwork ideas that have worked in the past? Share them in our comments section!