As many of you know, I like words, their meanings, and their use. And for those of you hearing me for the first time, I believe that words matter, so when I began the process of formulating my thoughts on the “inspiration,” I went to the dictionary. That is what I do.  The definition that “inspired” me was “A person or thing that moves the intellect or emotions or prompts action or invention.” And, yes, the pun was intentional.

The reason that this definition grabbed my attention is that it allowed me to focus in on what can be considered inspirational and as I mulled this over, I concluded that inspiration doesn’t need to come from the wisest, the smartest, the most popular, the wealthiest or the person who is the most of anything. It comes from each and every one of us at different times and many times when we don’t even know that we have prompted an action or invention. Isn’t it amazing that things we do and never really think about can make a difference in someone else’s life? 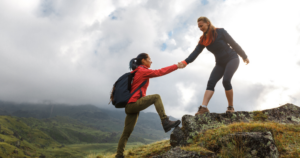 Two memories stirred as I was thinking about this, the first at the celebration of life for my father, when two of the young men from the small community in which our family lived, traveled multiple miles to pay their respects. Their stories were almost identical, though they happened in different years, they were the teenagers who were labeled the problem kids by almost everyone in the community, except my dad. He thought of them as kids with problems. They both said he took them to dinner at a local drive-in after work, I can only picture the sight, of my dad in uniform and the “problem boys” must have presented. They said he asked them “What’s next – you are getting ready to graduate, so what’s next?” He informed them that he thought they were smart, they couldn’t have pulled off some of their pranks if they weren’t, but it was time to think about the future. He thought they could accomplish the things they might even be afraid to dream of if they would decide what it is they wanted to accomplish and then apply themselves.

That was it – no other lectures, just conversation about the community, school, the sports items of interest. He paid the bill, and they went on their ways. He told no one of these conversations, even my mom who was always his bride, even after 58 years of marriage. Those young men both came to pay their respect and told my mother, my sister, and myself of those conversations. And, how those conversations inspired them to do more than what they thought might be possible simply because someone saw something in them that they had not seen in themselves. Both went on to have successful careers outside of that small central Missouri community, one in law enforcement and one as an officer in the military. Both took time to come see a grieving family and tell others their stories. The act of inspiration in paying it forward.

The second memory that came to mind happened a few years ago in a classroom in DC. As a professional development facilitator, I train classes across the United States, and occasionally I have the chance to see the same people more than once. I was in a classroom and a woman approached me and said she had been in a class that I had been training several months before. During the course of that class, she had expressed disappointment in her daughter’s decision to forego college to join the National Guard and start her studies to obtain a real estate license. As she talked about her daughter’s decision it became apparent to her that she was disappointed because she felt her daughter would not have the same experiences from college that she remembered. The only question I remembered asking was, “Whose dream should she be pursuing?”

In the second class, she stated that her daughter had received her real estate license and was working through a well-known agency in the district and prospering. She also noted that through the National Guard her daughter was looking into educational opportunities that could help her develop in both of her lines of passion. And, better yet, she informed me, that when she talked with her daughter about setting goals to support her dreams, their relationship became more positive and supportive. A simple conversation on a 10-minute break helped inspired her to take a different approach or action. One that I would never have known about except for the random chance she was in a second class.

As we move into the holiday seasons, and with these two memories fresh in my mind, I can see how we all can inspire others and ourselves to take action, in the big and little things that make up our days. I think of the movie “It’s A Wonderful Life,” and one of my favorite quotes, “Strange, isn’t it? Each man’s life touches so many other lives. And when he isn’t around, he leaves an awful hole, doesn’t he?” May you spend the holiday season and the new year inspiring others.

Cheryl Grazier is the Principal of Cheryl Grazier Consulting LLC and has over 20 years of business experience in both the public and private sector as a trusted advisor in the areas of culture change, strategy implementation, program management, team and leadership development. Cheryl has worked in a variety of industries, including communications, government agencies, governmental contracting, and real estate.

She is particularly passionate about developing people skills and leadership capabilities for individuals.