You are here: Home / Featured Home / 5 Ways to Take the Lead and Communicate Through a Crisis

When bad things happen, how you communicate can make the difference between a solid recovery and a sinking failure.

Most women in leadership will have to get employees through a crisis at some point – from layoffs and critical errors to workplace tragedies and natural disasters. 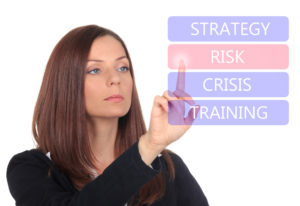 The hope is that any crisis you and your employees face will be small and manageable.

Still, women in charge can learn how to handle any crisis from leaders who’ve navigated the most severe.

“The temptation to withhold bad news, soften the blow or wait for more information is always tempting,” say Harry Hutson and Martha Johnson, authors of Navigating an Organizational Crisis. “Naming the truth, pronto, is the crucial first step toward recovery.”

Tell people quickly as much as you can of what you know, how you’ll learn more and when you’ll update them.

Once people know the truth, they want to make sense of it.

You have to help them make the connection between “what’s just happened” to “what we can do with what’s just happened.” Lay the foundation – perhaps calling on your company or group mission – and paint a brief picture of what the future will look like. Be honest that it could be chaos for a short time. Then explain how things will go back to normal or become better.

Example: Mary Barra, a General Motors electrical engineer, was more than qualified to be appointed the first CEO of the company in 2014. Just two months into her administration, crisis hit in the form of report that GM had put more than 1.7 million cars on the road with a defect that led to at least a dozen deaths.

She took no time to acknowledge the story, apologize and admit, “Something went very wrong…and terrible things happened.” Then she explained what the company would do to make things better.

Leaders want employees to see that they’re also participants in the difficult situation, feeling the same or similar emotions and having the same struggles.

For instance, when President George W. Bush stood at Ground Zero after 9/11, someone yelled that the crowd couldn’t hear him. He responded louder, “I can hear you, and the rest of the world hears you! And the people who knocked these buildings down will hear all of us soon.”

Not you. Not me. Us. President Bush had made himself part of their story.

The key: Express emotions you truly feel. Avoid extremes – despondency, rage, superficial optimism, etc. – to avoid losing credibility when your people look to you for leadership.

Storytelling in a crisis is two-way communication. You can paint the picture and give employees hope, but they won’t be assuaged until their concerns – spoken in their words – are heard and addressed. Then, they’ll be more prepared to buy in to the recovery and do what needs to be done.

Denise Hudson was a Senior VP at a Pennsylvania pharmaceutical company during a supplier shutdown. A lot was on the line –a potential $650 million loss to her company, the support of employees and loyalty of customers. Many people were upset. Some blamed her.

She took a listening approach for almost five hours: Employees, customers and colleagues told her how awful the situation was and how they felt it was hurting them. “You’ve got to involve the people,” Hudson said. “And they’ve got to feel they can tell you (what) they think.”

That’s most true in a crisis. Listen to their concerns. Use their exact words and emotions to address the concerns.

While overcoming a major obstacle is imperative to leaders and their teams, it’s not something that can be rushed.

In crisis, people still need to go through the natural process of healing. They need to live their part of the story.

You can – and will likely need to — push them through the necessary tasks and motions to move on. But give them time to absorb and accept what’s happened – and create their own stories of triumph over it.

Leaders can never fully prepare for a crisis or major setback. But you can successfully get your team through those tough situations and on to better days.