You are here: Home / Featured Home / 5 Ways To Boost Your Mental Toughness

Are you tough enough to compete for your next big role?

Yes, you have the experience, skills and proven track record.

But do you have the mental toughness to succeed?

“Successful women take a different approach than their counterparts,” says LaRae Quy, author of Mental Toughness for Women Leaders and former FBI agent. “The obstacles they face are tremendous, but what is commonplace among them is this: they are mentally tough.”

Not just for athletes

Mental toughness isn’t just for athletes. The business world is a sort of sports arena, and professionals need to be mentally tough to win.

Instead, we’re talking about managing emotions and behaviors in productive ways — then reacting to people and situations in powerful ways.

Here are five tactics women in leadership can use to improve their mental toughness:

Women in leadership need to adapt. The unexpected happens just as much in a boardroom as it does on the playing field. 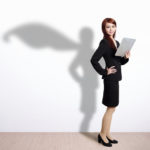 Adaptability allows you to not only land on your feet when blindsided by the unknown, it pushes you forward and can even help you avoid obstacles.

The basis is of adaptability is confidence. With it, you can absorb the unexpected and its consequences without getting defensive. Women in leadership want to stay resilient and look for new ways to solve the issue.

Tip: Confidence is often built through accomplishments reached outside of your comfort zone. Challenge yourself to step outside of that zone once a month in a personal or professional manner.

2. Draw on your willpower

We often think of willpower as an internal force that prevents us from doing something (i.e., eating the doughnut, watching TV instead of going to the gym, having a cocktail). But willpower is equally powerful the other way: It pushes us to the next level or beyond the roadblock.

Willpower could be the most important element of mental toughness, and many people don’t believe they have enough of it to make changes that will improve their lives and careers.

But you do, and you can improve on it.

Tip: Look for opportunities to go one step beyond where everyone else stops in problem-solving, projects and planning. Then take the step and make the significant change or improvement more often.

Mentally tough athletes dig deeper to find the resolve to go on longer than most of us. It’s not natural for a human to run 26.2 miles, swim 2.4 miles and bike 112 miles. And that’s why only a small number of people compete in Iron Man triathlons (and an even smaller number wins).

“They focus on giving their best and fighting hard until the end, with persistent intensity throughout the game,” says Christine Riordan, a dean at the Daniels School of Business in the University of Denver. “Game-ready leaders are able to exert and resist great force when under pressure and keep going against insurmountable odds.”

Tip: Mental strength isn’t just about outlasting your opponent or winning a negotiation or argument. It’s just as important to know when to flex it. Mentally tough leaders want to assess whether the fight is worth the win before they enter the ring. Consider if winning will benefit the company, your employees and your career before you exert the force.

Emotional intelligence is an ability to:

Bottom line: Women leaders need to know what makes them tick and recognize what makes the people around them tick. They can use that knowledge to relate to and empathize with others.

With that, women leaders waste little time and energy trying to interpret people and situations and can make good decisions faster.

Tip: As children, girls are generally given more permission to get in touch with and express their inner emotions than boys. “Take advantage of it,” Quy suggests. “It’s a soft skill that will allow you to make hard decisions.”

5. Develop the mindset of a champ

In the 1980s when Quy was one of a few female FBI agents, she pretended not to notice when her male colleagues didn’t invite her to lunch or include her in meetings on the most important cases. She was uncomfortable, but unflappable. She remained positive, and involved herself at every opportunity she got, moving up many times over a successful career.

Mentally tough champions have positive attitudes like that. They don’t think “can’t.” They focus on what they “can do” and “will do” through more training and discipline.

Tip: Choose a positive attitude and let that steer you forward.

The best leaders rise to the top because they couple their skills and smarts with mental toughness to overcome obstacles and relate to other people. Taking steps to develop and use the right amount of mental toughness can help women in leadership compete and win in business more often.