On the surface CBS’ new TV show Supergirl may not apply to you, even if some days you might feel like you could leap tall office buildings in a single bound.

What many don’t realize is that this show isn’t just about the caped heroine but also about her strong support team, especially her relationship with her boss, Cat Grant. In fact, in many ways the show serves as a case study in women’s leadership.

Below are 4 women’s leadership lessons you can harness from the Monday night show.

Many women in the workplace still bristle at being called a girl, rather than a woman. It’s an ongoing debate that the show touches on when Kara (Supergirl’s true identity) is upset after Cat dubs her persona Supergirl.

Kara: “If we call her ‘Supergirl,’ something less than what she is, doesn’t that make us guilty of, of being anti-feminist?”

Cat: “And what do you think is so bad about ‘Girl?’ Huh? I’m a girl. And your boss, and powerful, and rich, and hot and smart. So if you perceive ‘Supergirl’ as anything less than excellent, isn’t the real problem you?”

While many would agree with Kara, questioning the term which could downsize Supergirl’s credibility, her boss poses a good point. Why is being referred to a girl a negative thing? Not only does Kara own the term, but she hones her power proving that she is not one to be reckoned with.

Always’ “like a girl” ad campaign hit the market last year reminding viewers that performing
like a girl shouldn’t be considered an insult. 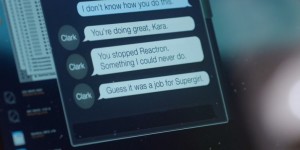 Not only are Supergirl’s fighting skills undeniable, but she has the mental strength to pick her battles, the smarts to identify enemies and was also able to do what her cousin Superman never could – defeat his longstanding nemesis Reactron.

This also translates to the office – never let anybody underestimate you or your abilities.

One of the biggest challenges women face is the seemingly inevitable choice between their career and family. Kara is in awe of her boss’s success – creating an empire, winning an award for women in media and prioritizing family. One night she asks Cat how she does it:

Cat: “I figured out how to be brilliant in business and then I added being a brilliant mother. Far too many women burn out trying to do too much before they’re ready.”

Cat: “Of course. Just not all at once, and not right away.”

This is an important lesson. You can’t get to point D, without stopping at A, B and C. Rather than feeling the pressure to choose between work OR life, women can choose both – a career and family.

You understand that as a leader, part of your responsibility is influencing younger generations, whether that be your children, an employee or a mentee. Similarly, it’s important to Cat that her son Carter recognizes strong women in the world, and not only for their looks.

Carter: “I met Supergirl. She was amazing. And she was so much prettier in person.”

Cat: “Oh. Well… did you notice any of her other attributes?”

Cat: “And smart and brave and kind and she saved you all.”

Look around at the office and you may recognize different spheres of influence, especially those that may relate to you. Make sure to lead by example leaving a lasting impression for those looking up to you. Challenge ideas and encourage discussion.

While these are only a sampling of the lessons validated in Supergirl, you can see that the show is a microcosm for women’s leadership applicable to all.

What are some shows on your must-watch list? Comment below with other shows you watch that project women’s leadership lessons or ideals.