Are you a woman who works in a STEM (science, technology, engineering, math) profession? Even if you don’t, we bet you do interact with women in STEM fields to do your job.

There’s some solid proof that having women in traditionally “male” jobs boost their companies’ profitability. A majority (63%) of recently polled executives say having women in leadership positions at their company actually increases their profit margins. The analysis comes from a Futurestep study conducted by Los Angeles-based Korn Ferry, a global advisory firm that polled nearly 1,000 executives. 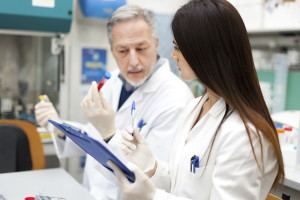 That type of profitability boost can really influence a company’s fiscal year-end budgeting. Any company thinking seriously about where next year’s budget dollars will go should consider putting more money behind recruiting women. So why do less than half of those companies polled (30%) make an effort to recruit more female candidates?

More than ever, women leaders in STEM careers should take advantage of a prime opportunity to make the case for expanding women’s roles.

Have STEM Businesses Missed the Memo?

The U.S. Department of Labor predicts there will be 1.4 million computer specialist positions open by the year 2020. But according to a report by the National Center for Women & Information Technology (NCWIT), the amount of women in computing occupations has steadily declined since 1991, when it peaked at 36%.

It’s not for lack of female STEM expertise. Consider these recent findings:

Why are STEM careers more challenging for women to enter? In an interview with Fast Company, Karen Purcell, an electrical engineer and founder and president of PK Electrical Inc., who authored Unlocking Your Brilliance: Smart Strategies for Women to Thrive in Science, Technology, Engineering, and Math, said in the past, STEM fields haven’t been inviting for women. “Back in the 1960s, women were almost prohibited from applying to STEM jobs. That’s the way we’ve been brought up,” Purcell said.

The push for active recruitment of women to serve as leaders in STEM fields has even been recognized at the highest office. In 2003, President Obama stated, “… I strongly believe that we need to have more girls interested in math, science, and engineering. We’ve got half the population that is way underrepresented in those fields, and that means that we’ve got a whole bunch of talent…not being encouraged the way they need to.”

Ways to Make a Difference

So is there anything women already in STEM fields, either for science and tech-based companies, or in any capacity, can do to make a difference?

Lead the push for more women hires. Most companies have referral plans that encourage employees to bring solid prospects to their HR and recruiting departments. Where possible, push efforts to tap more women for STEM positions where you work; even refer friends or former colleagues if they’d be good fits for positions in your company in those fields.

Create mentoring opportunities where you see them. Since many STEM careers have traditionally been dominated by men, we could be facing a shortage of female mentors who have a leadership positions, either in STEM-based companies (e.g., tech and manufacturing) or in STEM-based positions (e.g., IT, engineering, analytics). If you’re starting to see a growth in women in STEM positions in your organization or department, initiate a mentoring program and encourage other women to take part.

Get involved in initiatives to promote STEM fields. A comprehensive tool, Why We Need Women in Data Science, provides a list of community organizations that promote peer learning, mentorships, workshops and conferences for women in data science and other STEM education and careers.

Whatever the effort, it’s likely that the continued promotion of women hired in STEM fields won’t succeed as quickly as it could without the help of women leaders already in those fields.