You are here: Home / Communication / Woman, Interrupted (And What You Can Do About It at Meetings)

For those of you who viewed the presidential debate the other night, perhaps you felt unnerved as you watched Donald Trump continuously interrupt Hillary Clinton. By some reports, he interrupted her more than 50 times.

No doubt, if you’re in a leadership role, you’ve experienced similar interruptions at mostly-male meetings or brainstorming discussions, where a male colleague attempts to talk over you as you begin to bring up a point. 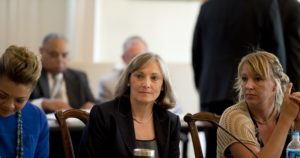 “Many women watching Trump’s treatment of Clinton feel a sickening sense of familiarity with patronizing behavior directed at them during every work day,” vocational psychologist Dr. Janet Scarborough Civitelli told PBS. “No matter how much they accomplish, a man with a fraction of their knowledge and achievements stands ready to critique them.”

So what are women doing to stop these interruptions? Plenty…

Women Are Interrupted Twice as Much as Men

“Manterrupting,” as Jessica Bennett, author of Feminist Fight Club: An Office Survival Manual for a Sexist Workplace, dubbed this phenomenon in Time magazine, can be stopped.

Recent research on the topic shows that “women are interrupted at twice the rate of men,” says Bennett, and when women do speak up, their words are given less weight and treated as less valid than men’s.

Many women leaders are familiar with the “unnecessary interruption of a woman by a man,” as Bennett defines manterrupting. She does add, though, that not every interrupter is a man.

6 Ways to Interrupt a Manterrupter

In a typical business setting, you have ways to shut down a manterrupter, who cuts you off mid-sentence during a workplace discussion:

Acknowledge and continue. Using phrases like “Excuse me, John, I wasn’t finished” or “Hold on a second, Bill” can be effective, and then just keep talking. If you’ve got a particularly aggressive manterrupter on your hands, then politely but firmly say, “Let me finish here. Please, hold your thought.”

Get powered up. Continue speaking, while maintaining steady eye contact and a firm tone of voice. “Stand up, walk to the front of the room, place your hand on the table — whatever it takes,” says Bennett. “These high power poses will make you look more authoritative.”

Play “verbal chicken.” Some women talk “really, really loud” to drown the manterrupter until the offender give in, says Bennett.

Show body language: Leaders develop their own hand gestures when they’re talking and you might create your own that signal to others to “hold that thought.” You can use one finger in the air or a flat hand held up to stop interrupters before they gain momentum.

Take preemptive action. Since interrupters thrive on opportunity, don’t give them one. By avoiding their gaze, you’ll keep your concentration. “If a serial interrupter is in the room and you can feel they’re itching to have their say, don’t give them the benefit of eye contact,” Citymothers founder Louisa Symington-Mills told The Telegraph.

Empower other voices. If another woman’s talking and is interrupted, make it a point to stop the interrupter in his tracks, says Bennett. Simply speak up to say, “Wait, let her finish,” or “Hey, I want to hear what she’s saying.” Top female staffers at the White House, as reported in the Washington Post, made a pact that helps them from being drowned out by their male colleagues: When a woman makes an important point at a meeting, the other women repeat it, forcing the men in the room to recognize the contribution.

It’s only by consciously making efforts at every single meeting to make your point, while working to become less rattled by the interruptions and taking more actionable steps to stop them, that you will eventually be perceived as someone who really has a lot to offer. And others – male and female – can’t help but notice.

We’d love to get your feedback! Please email to share your thoughts on manterrupting at your job, and if you have found effective ways to deal with it. Thanks.