Women leaders scored a big victory as another male-dominated industry is welcoming a woman into their leadership ranks. Kathryn Smith has shattered the NLF’s glass ceiling. She was hired as a full-time coach, making her the first female full-time NFL coach in history (the Arizona Cardinals hired Dr. Jen Welter as a coach in 2015, but it wasn’t full-time). She will be serving as the Special Teams Quality Control Coach for the Buffalo Bills. This unprecedented hiring has a meaningful impact for the women’s leadership movement.

As a coach, Smith will have a leadership position in what had been an exclusively male organization (in terms of players, coaches and upper management). Not only does this event open the door for more women in the NFL, and athletics in general, it demonstrates doors previously closed to women can be opened (or broken down when necessary). 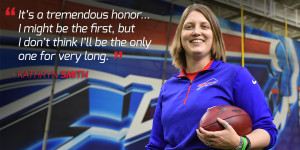 Hiring Smith as a coach was a long time coming, for the industry, and her personally. Smith’s entry to the NFL began with an internship for the New York Jets (NYJ) in college. After graduation, she got hired full-time and worked her way up for eight years before NYJ head coach Rex Ryan took her with him to the Buffalo Bills in 2015. He announced she would become a coach on January 20, 2016.  For her full journey, Syracuse.com put together this excellent story.

What This Means for Women’s Leadership

Seeing a team within the male-dominated football industry hire a women in a leadership position demonstrates that the glass ceiling can hopefully be shattered in any organization.

And Kathryn’s story also serves as a model on how to do that. Here are some of the key characteristics of how her story can be applied to other fields and industries:

Meritocracy – Kathryn earned this job. She got hired at a low-level position and consistently proved her worth to move up the ranks. Years ago, she might have hit that glass ceiling and never been allowed to coach because she’s a woman. The fact that the Bills and Rex Ryan are looking at her accomplishments and talent – and not her gender – shows that the old attitudes are changing. Instead of taking the stance that “women can’t coach football” they are taking the stance of “we should find the best people available to be coaches.”

Society is Ready for Change – There are, of course, the standard sexist diatribes on why this is a PC media stunt or why it won’t work. Cleveland radio host Kevin Kiley made some waves with his inflammatory comments about the decision. And the typical, angry, I-don’t-like-change internet comments can be found on any article covering the story. But from Twitter to ESPN, the vast majority of public – male and female – reaction to the story has been extremely positive. This shows that the majority of the public embrace the change and are excited about the new opportunities it affords.

A Call for Greater Gender Inclusion in the Future – When this story broke, many people recognized it as a noteworthy, historic occasion. For some people, this was immediately followed by the question “but why?” And it’s a fair question. Women are capable of possessing all the traits of any male football coach. The surprise shouldn’t be that there is a female coach in the NFL – what is surprising is that it took this long for it to happen. Now that the barrier is broken, though, women coaching in the NFL should be a new normal. Kathryn Smith expresses a similar sentiment in a radio interview on The John Murphy Show: “I might be the first, but I think very quickly there are going to be many other women in the league. So I may be the first, but I don’t think I’ll be the only one for very long.”

Whether you’re a fan of football, women’s leadership or both, this story is a significant one. It gives a national stage and pop culture attention to the issue of women’s leadership and makes the NFL a little more inclusive. It will be interesting to see if Kathryn Smith is right about more women in the NFL. Even more interesting will be seeing what other changes occur. We’ve seen women get the right to military combat, now coaching in the NFL.

The question now becomes: What male-dominated world is next?