You are here: Home / Featured Home / V is for Victory: Women in the Military

Last week women were granted a major victory:  All U.S. military combat positions will be open to women – with no exceptions Defense Secretary Ash Carter announced.

The head of the most powerful military force in the world declared that “our force of the future must continue to benefit from the best people America has to offer. In the 21st century, that requires drawing strength from the broadest possible pool of talent.”

Who wouldn’t agree with that line of thinking – building teams based on the entire talent pool and not limited to 50% of the population?

The military performed a three year assessment of the viability of opening up all positions to women. Its findings not only apply to the military but also to the civilian workforce. What else can we learn from Defense Secretary Carter? Let’s take a look at some of his quotes from this important announcement. 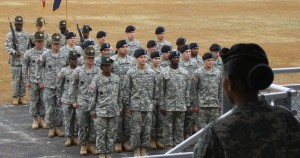 “Mission effectiveness is most important. Defending this country is our primary responsibility, and it cannot be compromised. That means everyone who serves in uniform — men and women alike — has to be able to meet the high standards for whatever job they’re in.”

Standards should be set for the role, not the gender. Like the military, the modern workplace can’t thrive if exceptions are made. Your goal may not be defending the country, but you still benefit from selecting talent from a larger pool of candidates.

When defining a new or existing position, think about responsibilities and outcomes you’re looking for. Put them in writing. You may also have access to assessment tools (often used in hiring but also in longer term talent development) that can provide quantitative support to your qualitative write up. Employing a variety of approaches will assist you in your ongoing quest of keeping standards high.

“Our people have mastered change excellently, and they’ve been able to do so because their leaders have taken care to implement change thoughtfully. Always putting the missions and our people first.”

Nobody likes change, but most agree that it’s necessary. The approach that you take for implementing those transitions is how you show your leadership skills. Think about everyone who is impacted by that transformation.

It’s likely that there’s not a one size fits all solution. If that’s the case, take the time to figure out different approaches for managing change and identify who might benefit from each approach. Some people are fine talking through transition in a group setting – others need that one-on-one time. It may be hard to find the time for those discussions while you’re knee deep in implementation, but in the long run it will pay off.

It’s All About Teamwork

“As we focus on the individual contributions that each service member makes, we also have to remember that in military operations, teams matter.”

That’s not just the case for the military. Leaders need to be able to put together strong teams. When building a team look for people who have strengths that complement each other. These include both hard and soft skills. Take the time to help members of the team understand each other’s strengths and how everyone can benefit from them. A team made up of people with varying skill sets is not only more likely to get the job done but also have more creative ways of turning problems into solutions.

Don’t forget to celebrate the accomplishments of your team – it’s a great way to motivate them. Communicate with your group regularly and let them know when they do something that impacts the business in a positive way. When an individual successfully tackles a problem reward that person with more challenges. They’ll feel empowered knowing that you trust them to do good work. Confident individuals make a strong team.

Creating and maintaining high standards, effectively managing change and building productive teams are all signs of a good leader – both inside and outside the military. The more female leaders can do this, the more roles at the top will become available. Let’s join the United States military in declaring that all roles in the workplace are open to qualified women.

Want to hear more about what Defense Secretary Ash Carter had to say about the new status of women in the military? Take a look at the full transcript.

“It took me quite a long time to develop a voice, and now that I have it, I am not going to be silent.” - Madeleine Albright, Former Secretary of State

I spent six years at an all-girls middle school and high school. This experience shaped who I am today as I left confident that women could do anything they set their minds to. This has served me well throughout my career especially when I have regularly been the only woman with a seat at the proverbial table. I’ve developed and marketed training programs for many audiences including accountants, environmentalists and HR professionals, but being a driver in the women’s leadership space is the most meaningful thing I’ve done in my 25 years of working. I am excited to be a part of the Progressive Women’s Leadership team to share my voice to help other women find theirs.

Reach out to me on LinkedIn
LinkedIn