You are here: Home / Communication / Consult Your Inner Diplomat to Resolve Workplace Conflict

If there’s one common thing that frustrates women leaders, it’s coping with on-the-job conflict. You aim to keep your department or workplace free of drama, bickering and insubordination. But inevitably, petty encounters and conflict situations arise.

Even diplomatic bosses dread diffusing battles between co-workers, or worse, between themselves and an upset employee. 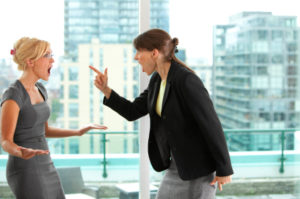 Many women leaders project an honest sense of camaraderie with employees and co-workers, but sometimes we may come across as overly friendly to avoid any appearance of a superior “Boss-Lady” complex. This approach might win us employees’ affections, but it can backfire when it comes to laying down the law and nipping problem situations in the bud.

But there are ways to use your leadership skills to keep harmony without disrupting your good relationship with your employees.

Be Aware of Your Friendship Status

Leadership coach Kristi Hedges, author of Power of Presence: Unlock Your Potential to Influence and Engage Others, told Forbes that forging close friendships across reporting lines can hinder your objectivity when you’re faced with brokering misunderstandings, disagreements, and conflicts of interest.

Being too chummy compromises your relationships with employees. Two subordinates who are involved in a conflict may both think, “Well, Janice isn’t just my boss, she’s my friend. I know she’ll side with me in this situation.”

The obvious problem: If you’re friends with everyone, it’s difficult (if not impossible) to fairly treat one employee over another in a conflict. Your ability to remain objective goes right out the door.

No matter how congenial we are, part of leading well involves establishing that we are in charge. Employees need to know that you’re first and foremost their supervisor, and thus your top priority is to do your job. This should be reaffirmed when an issue arises between employees, so they don’t take your decisions personally. Your first approach should be to tell both parties you’re treating the situation impartially, and to treat both on equal footing.

Even if you initially feel one person is right and the other wrong in a given situation, assuming the mantle of judge and jury won’t help. Instead, use your “inner diplomat.” At the outset, take on the role of investigator: find out what happened, what the underlying problem is, and how it can be resolved.

Step 1: Empathize. “Listen, and show that you’ve heard by recapping how [things] look from each team member’s point of view … People calm down when they can tell their story and know that it’s heard,” Kanter says.

Step 2: Offer support. Show team members ways they can resolve conflicts themselves, and avoid the temptation to jump in to do it yourself. “Empower them by backing them up—they can do what needs to be done, knowing that they have your support,” she says.

Step 3: Invoke higher principles. Ask what the conflict is about in the first place. Be the one who steps in to remind those involved of the principles that are more important than the cause of the conflict, Kanter suggests. For example, Employee A claims Employee B is intentionally trying to sabotage her work. Your initial conflict-breaker could be: “We’ve all got the same goals here, and what’s important is that we all get an equal chance to contribute. Let’s discuss why you feel that way.”

Being known as a fair and empathetic boss, rather than being everyone’s pal, will ultimately earn you more respect on the job—and will help you keep the peace.