You are here: Home / Leadership / 3 ways to tackle those tough talks no one wants to have

No one likes having sensitive conversations, but you know the story – it’s part of your job.

Conveying information – whether it’s about an employee’s tardiness or poor hygiene – tactfully and openly is what sets you apart as a leader. Handle it the right way and your conversation will help the office run smoother and ward off bigger problems down the line. 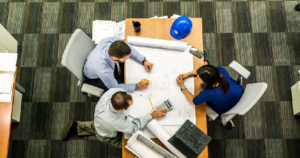 It’s tempting to chit-chat before diving into the problem. Easing the person into the conversation will make it sting less, right?

Not so fast, says West. Transforming small talk into the difficult talk is a big challenge.

“When it was time to talk about the real issue, all the pleasant chit-chat make it even harder to change the topic,” West says. “My good intentions sabotaged the process.”

Her approach now is much more straightforward: I have something difficult to talk about with you.

“Once I’ve said that to someone, there’s no going back,” says West.

“You keep turning your reports in late.”

“These reports have been late three times this month.”

See the difference? The first is an accusatory statement, which will instantly make the person defensive. The second one is just stating the facts. There’s nothing personal about it.

Plus, West says, it’s specific enough to make room for more conversation – like why the reports are late.

“You still need to be specific about the issue, but opening with a depersonalized statement can make it easier,” she says.

The No. 1 reason why sensitive conversations come up in the first place? “People seeing the same thing in different ways,” West explains.

Always keep an open mind and listen to the other person. Take his or her perspective and experience into consideration – it may be very different from yours. Aim for questions that uncover the issue, and encourage ideas for improvement.

Strike an even balance

Think about the last time you met with the person. Was it for another negative conversation? Connecting with direct reports on a regular basis – not just for negative feedback – is critical. If the person only sees you when things aren’t going well, the relationship is going to melt away.

Make it a goal to give positive feedback when you see fit. This way, your employees will know the tough talks are just as important. And as always, show appreciation for their hard work. It’ll boost morale and help you get in the practice of giving feedback.