You are here: Home / Gender Partnerships / The Power of the Male Ally: Engaging Men, Advancing Women

A special report from the Pennsylvania Conference for Women

Do you engage more with male or female colleagues? It matters.

Since women have a steeper trek to the top, having more men in your professional life just might get you there quicker. 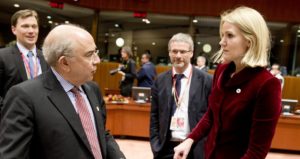 The male ally is the key to bringing more women into leadership roles, said documentary filmmaker Robin Hauser Reynolds at the “Gender Partnership: Engaging Men as Advocates to Pioneer Gender Equality” breakout session at the recent Pennsylvania Conference for Women.

What exactly is a male ally?

Think of it this way: “A male ally is a man who will advocate for women even when there are no women in the room,” said Reynolds, whose documentary, Code: Debugging the Gender Gap, delves into the barriers women face in the tech world – and what can be done about it.

Developing male allies is key, said Reynolds, because sexism isn’t just a women’s issue. Men are missing out on the advantages of having a woman on the team, and she pointed to research that backs this up:

But how do you align with a male colleague? And what qualities do you look for in a man to align with professionally? The top leaders on the panel – which included Beneficial Bank CEO Gerry Cuddy, Comcast VP Carol Eggert and Nutrisystem CEO Dawn Zier – gave some suggestions:

Put out your feelers: Who’s got empathy?  “You have to look at what the genuine self-interest is of a particular man,” said Reynolds. “It could be a man in upper management who has a daughter and cares about the advancement of women or a man who has a working wife and understands the complexities of that.” Discovering a man’s empathy level is not something you’ll know right away. You’ll begin to notice, through several conversations or by comments he’s made over time, whether he would understand what it’s like to be in the minority, how hard it is to break through the glass ceiling or the value that a woman would add to the team.

Start a dialogue. “We need to help men navigate the skill of empathy,” said Reynolds. She gave an example of how a male ally panel of “well-meaning intelligent men” couldn’t seem to say the right thing at the Grace Hopper Celebration of Women in Computing conference two years ago and received strong backlash when they told women the best way to deal with workplace discrimination was to “work harder” and “speak up.” “That’s why we need to help men understand how to speak about these issues,” said Reynolds.  Cuddy, for instance, came to a keen awareness because his wife was in the auto industry. “I watched what she went through and it heightened my antenna,” he said. The panelists talked about an unconscious bias  that men may have and that’s what needs to be pointed out and discussed in order for real change to happen at the senior management level. “Raising awareness is not always comfortable,” said Cuddy, “but it’s a dialogue that needs to happen.”

Tell a story. Studies have shown that telling stories increases empathy, and Eggert suggests that might help you increase awareness in a male colleague who doesn’t seem to understand the daily struggles women face in the workplace: “Maybe don’t even make it personal. You might say, ‘This happened to my sister. She was discriminated at her job…’ You can relate without having them relate to you.”

Include men into women’s groups. Since men are instrumental in helping women rise to the top, they need to be part of the process. When you identify male allies, said Reynolds, invite them into your woman’s networking group. “Collaboration really helps,” she said.

Seek out a male mentor. Usually, women will seek out women mentors but male mentors tend to be higher up in the company, have more influence and are more willing to take chances. “Male mentors are more likely to advocate for their mentees than the women mentors,” said Eggert. She pointed out a Harvard study that showed that male mentors got their mentees substantially higher salaries for their mentees as well. But how do you recruit a male mentor? “The No. 1 thing you can do is be great, get noticed,” said Zier, who’s had mostly male mentors.  “You may get a compliment from a male colleague after a presentation at a meeting, for instance. That’s an opening, but then you have to take the opportunity and follow it up: ‘Can we grab a cup of coffee so I can ask you a question?’ Find out if there’s a connection.”

Now, it’s time to take a take a step back and think about who in your company can help you move ahead: Do you know who your male allies are?