You are here: Home / Leadership / The Keys to Handling Criticism Like a Pro

Of course, this is often stated prior to the actual delivery of said criticism.

Let’s be honest: We don’t really love to hear criticism, no matter how well-intentioned it is. We might appreciate it, and we may even expect it at times. But even when done in a constructive, sensitive way, hearing our peers tell us we missed the mark or somehow fell short has a diminishing effect. 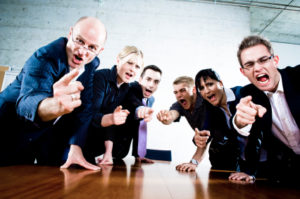 Even natural leaders can struggle with this. If we didn’t, we wouldn’t be human. But what defines leadership is how we deal with or respond to criticism.

The Importance of Getting Past ‘It’

We’re well aware of why we get criticism—most successful women in top positions know there’s always room to improve. Someone giving us valid and helpful critiques only helps us make necessary changes that ensure future success.

Whatever “it” is that you’ve received negative feedback for, the first step is accepting that it doesn’t have to kill your career for the future.

Keep some key concepts in mind to enable yourself to always handle criticism like a pro.

Key #1: Own Your Mistake

When told you’re in the wrong, the smart first step is to accept responsibility and have the hard conversation up front, says Emily Rooney, President of the Agriculture Council of California. She refers to this as “eating the frog.”

“If/when ugly situations arise, I have the painful conversations first,” she said, during an interview for SmartBrief.com. “It [increases] trust [with others] by providing total transparency.”

It never pays to try to pass the buck or point fingers. By taking accountability up front, you deftly recognize that despite your mistake, your first priority is to learn from it and move on, says Teri Carstensen, president of bank solutions for Fiserv.

Key #2: Acknowledge the Nature of the Criticism

Not everyone who offers criticism is out to get you. Being able to distinguish legitimate concerns from false alarm bells is a mark of professionalism.

Sure, we can recognize when peers are just trying to sabotage our ideas. Unfortunately, it happens. But when we approach every critique with that in mind, we keep ourselves from making what could be decision-saving adjustments.

Though at first you might be stung by someone’s criticism, try to see it for what it is. Is your criticizer playing devil’s advocate? Does your critic not fully understand your approach and just needs more information? Is there something you might have overlooked that the person who is criticizing you recognizes?

An open and honest relationship with our supervisors and employees begets—even demands—constructive criticism at times.

But if co-workers get the impression you don’t want to hear any bad news, they’ll likely keep it from you—probably to your detriment.

No one wants to be a leader who “lives in a bubble,” whose team is wary of letting you know when things are going wrong under your watch.

We need to be able to ask for and accept critical feedback from people we trust, Fiserv’s Carstensen says. “People want feedback [mostly] when they think it’s positive, but they’re not necessarily seeking it when it’s critical,” she adds.

Key #4: Stop Dwelling On It

Obviously, we don’t like the idea of co-workers dwelling on our shortcomings or mistakes. So why do we do it to ourselves?

Overthinking what you did wrong magnifies critical feedback into something it probably wasn’t meant to be. Negative feedback on one of your projects doesn’t mean you’re an overall terrible project manager, for example.

“When things don’t go well, do a post-mortem, and see what you can do better next time. But don’t … spend a lot of time on woulda/shoulda/coulda,” Carstensen suggests.

Bottom line: Savvy leaders know when to change the conversation from negative fallout to positive change.

Key #5: Above All, Put it in Perspective

We’ve heard of (and may even know) people who seemingly were never told any bad news—so when they’re the recipients of criticism, it makes them come unglued.

And when they hear about someone else’s bad fortune, they hide in the idea that “it won’t ever happen to me!”

Women with long and successful careers need to remind ourselves that not everything goes smoothly all the time. We could face more setbacks than we expect—even ones that could potentially shake our careers.

But over the long haul, keeping criticism in perspective as part and parcel of everyday progress in our careers will ultimately make it easier to accept, address—and get over.