You are here: Home / Leadership / Study: Board Networking Can Further Your Career Success

Some news to kick off your 2017 on a high note: 2016 saw a significant hike in women heading companies in the S&P 500. That’s according to S&P Global Market Intelligence, which tracks top U.S. and European companies.

We know successful women tend to become more successful when working under the leadership of other women. But you should know, it’s not just about the C-Suites. It’s also related to women on a company’s board, stated a recent report published in The Atlantic. 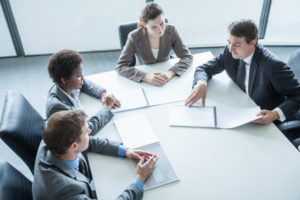 The higher the share of women on corporate boards during one year, the more likely the company was to hire women executives in the following year. So say researchers David Matsa, a professor at the Kellogg School of Management at Northwestern, and Amalia R. Miller, an economics professor at the University of Virginia. They co-authored a 2011 study published in American Economic Review that looked specifically at the roles of women on corporate boards and how they affected the elevation of more women to top positions.

The reason is simple, the study concludes: Because many women on corporate boards tend to communicate through professional networks, they’re more likely to meet other women whom they can recommend to job positions that otherwise might go to men.

So if you’ve decided it’s time to kick your networking opportunities up a notch, consider contacting and actively networking with a local or national board in your career field.

One way to get board networking to work for your career is to learn more about the roles members of boards play, says Mary Key, a business consultant and executive coach. “Do some research on and network with women on [those] boards and their contacts,” Key says.

While joining a board might not be a current option, women should still be proactive in getting to know board members who could help influence their careers, Key noted at a recent forum sponsored by Women Executive Leadership (WEL) and 2020WOB.

She adds that while joining a board can be challenging because there are often limited seats, it doesn’t hurt to network and sell your skills and experience that could expand your career options.

These three approaches are a good start:

1. Do some investigating. Find out what the board represents and how it benefits members. Is there someone already affiliated with the board you could start a business relationship with? Do they hold new membership drives you can take advantage of? Do they sponsor events, conduct seminars or do meet-and-greet sessions?

2. Take the time to follow up. If you meet board members at a networking event, don’t toss those business cards or lose their name and contact info. If you exchanged information with board members, it makes a good impression to follow up with an “It was nice to meet you…” letter or email. You never know—you might be kindling a future mentoring relationship.

3. Build on your knowledge. Is a board you’re interested in looking for public speakers? Does it need more outreach volunteers? Emphasize strengths you have that could contribute to their networking opportunities. Consider cultivating skills you know a board focuses on if you don’t already have the training or background.

Strategic networking with corporate board members shouldn’t be taken lightly—it could have a direct positive effect on your career.

Want to learn more about being selected for a board? Read about it here.