You are here: Home / Life Balance / Stop, Drop and Roll: Put Those Stress Fires Out (Without Getting Burned)

We are organized, punctual and efficient—most of the time. We are great at prioritizing and masterful schedulers.

Despite all this, stress happens. Even personal situations such as illness, family needs, moving or prepping for a vacation can shake our career focus and ratchet up stress levels.

People who constantly stress experience poorer health outcomes and a lower level of satisfaction in life, according to a study out of Oregon State University published in the journal Stress and Health. We tend to be happier when we accept that we can’t be all things to all people—and that there’s no such thing as “perfect balance.” 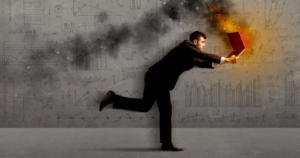 There are things we can and should do on a daily basis to de-stress. Problem is, those things might take a little time, so we say forget it—we don’t have enough time to begin with.

But combating stress often requires deliberate tactics. It helps to compare it to what we’re told to do when in a fire: Stop, Drop and Roll. Here are three top stress ignitors, and the ways to extinguish them.

The Stressor: You think you have too much to do in too little time.

How to Extinguish It: STOP—concentrate on a task, not on the clock.

Talking about how much we have to do creates a self-fulfilling prophecy, writes author Barbara Nixon.

“It’s something we do [to] spur ourselves on, rather than thinking it could have a detrimental effect,” Nixon says.

Instead, Nixon advises, replace the workload list in your head with one or two critical tasks, and be realistic with yourself (and others) about what you can actually do in the time you have. She suggests these tips:

The Stressor: You got something done—but aren’t 100% confident you did it right.

How to Extinguish It: DROP the second-guessing.

Quit looking for mistakes that might not even exist. Make the best decisions you can and then don’t worry about it, says Michael Woodward, PhD, an organizational psychologist and author of The YOU Plan.

A lot of the time, we’re the ones—not our bosses, co-workers or others—who create this stress. And most of the time it’s completely unnecessary. Yet once we start with the self-doubt, it can be impossible to turn off, like an annoying song that gets stuck in our head.

There are three things you can do to dispatch the noise:

The one thing to avoid: Letting anxiety cloud reason. If there’s a problem, you’ll likely be the first to know. But what you’re stressing about may not even be on anyone’s radar other than yours. So going over and over it won’t do anything except raise your blood pressure.

The Stressor: You’ve got a boatload of possible scheduling conflicts.

How to Extinguish It: ROLL with it—avoid the urge to over-plan.

We know more than a few women who are great at scheduling, but always seem swamped. Why? Because they overbook themselves to the point that they don’t leave any room to breathe—which causes more stress than simply saying no to something.

Don’t let this be you. Life often has really bad timing; an onslaught of events can happen all at once. When it does, just roll with it—and resist the need to fit everything in. Here’s how:

“Planning ahead, having a backup plan, and having a network [of] support make you better able to reduce conflicts,” says Kelly D. Davis of OSU’s College of Public Health and Human Sciences, the lead author on the study.

Not to mention, better able to reduce stress.