You are here: Home / Leadership Skills / Speak (Up) Now, Or Forever Hold Your Career

How many times have you left a meeting mentally going over what was said—and realize a really important point was totally overlooked?

“Darn, I should have brought that up! Now, no one is going to realize it could be a problem.” 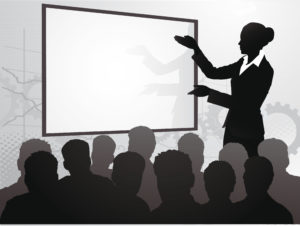 Why didn’t you speak up? Likely because a little voice in your head told you it didn’t matter, or everything important was already pointed out, or that you’d only prolong an already lengthy discussion.

Problem is, your decision to keep quiet could be detrimental not only to whatever was decided at that meeting—it could also be costing you career points.

Few women in charge want to be known for being “squeaky wheels.” The term calls to mind someone who’s constantly complaining, debating or hampering every solution with possible problems.

But women who work in competitive environments need the grease. Often, we deserve it, but are hindered by our own apprehensions. Consider these top three reasons we tell ourselves to stay mum:

What We Win By Speaking Up

One way to banish fear of speaking up is to grasp the underlying reason for doing it. If we recognize the positives that could happen if we speak up can fuel our determination to do it.

But how do you know when it’s right to speak up? Think through a few things first:

Are you speaking up to challenge the thinking about an issue or decision and provoke constructive conversation, or are you just aiming to prove a point?

What good can happen: If you just need others to agree with you, or want to prolong an argument, it’s not worth it. But if you’re interested in other points of view, and are open to differing ideas about the subject at hand, chances are your willingness to speak up will benefit everyone involved.

Are you speaking up because you could use others’ suggestions and critiques of an idea? If so, are you prepared to openly accept that feedback and work with it?

What good can happen: You could end up with genuine input about your ideas or plans—and it could help derail possible failure. Speaking up before you go down the wrong road will save you time and frustration, and your job in the long run.

Are you speaking up because you feel you’ve been overlooked, or feel strongly that you have an opportunity to show off skills or knowledge you might not have showcased before?

What good can happen: Speaking up when you believe you have something valuable to contribute will get you noticed. If the opportunity presents itself and you strongly believe in your arguments or ideas, you’ve earned the credibility to put it—and yourself—in the spotlight.

There’s really only one hard and fast rule about speaking up: Be certain that what you’re speaking up about is said at the right time for the right reasons. Chances are, you’ll later be glad you did.