The impossible happened on Saturday night – the seemingly indestructible MMA fighter Ronda Rousey went down in a knockout. So what happens now? Other than the rumored UFC rematch that is…

All leaders are occasionally caught off guard and fall. However, women are often labeled by their downfalls as weak or unqualified. All eyes are now on Rousey and what she does next has the potential to forward the women’s leadership movement. 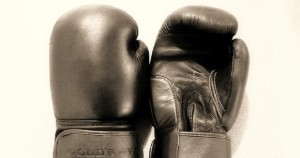 Ronda Rousey exploded onto the MMA scene in 2013, viewed by many as an unstoppable force. She broke down barriers in a male-dominated sport and became an internationally recognized celebrity. Not only was she undefeated, but she became the most marketable and highest paid fighter in the UFC, male or female.

In the past year, Rousey also launched the “Don’t Be a DNB” campaign standing up against body shaming. The movement was deemed controversial due it its acronym standing for “Do Nothing Bitch,” but it caught pop culture and the mainstream media by storm. Beyoncé even used a quote by Rousey to begin a few shows on her summer tour. The phrase comes from a speech in which she defined her purpose.

“I have this one term for the kind of woman that my mother raised me to not be. And I call it a do-nothing bitch, a kind of chick that just tries to be pretty and be taken care of by somebody else. That’s why I think it’s hilarious when people say my body looks masculine or something like that. (…) I think it’s femininely badass as f— because there’s not a single muscle in my body that isn’t for a purpose. Because I’m not a do-nothing bitch.”

Ronda is not calling women the offensive term, but instead inciting a call to action.

Now the MMA powerhouse has an opportunity – the defeat may have broken her perfect record but it also made her seem real and relatable to her fans. Ideally she will continue with the same confidence that she is known for, using the upset to learn from and further improve.

Rousey is a role model not because she is arguably the greatest fighter in the world, but because of her determination. She often attributes her success to her dissatisfaction after her last Olympic judo loss. Rather than walking away after her retirement from that sport, she was instead motivated to thrive in the world of MMA and came back a multi-time world champion. Her willpower, resilience and strength of character are what make Ronda Rousey a true leader.

This is an influential takeaway. Good leaders can be successful and will react to upsets as they occur, but great leaders use those same setbacks as reason to analyze their actions, prepare and improve. Even the best can be knocked down and leadership skills, just like grappling techniques, aren’t always inherent. They can be learned, developed and improved at any level. 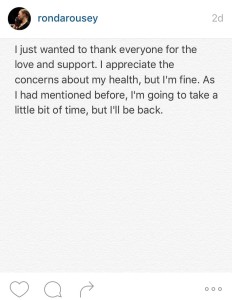 That is just what Rousey had demonstrated in the past after her judo career. Rather than walking away from a world she loves she went back to the mat to train, strengthen her skills and learn additional techniques. She used her newfound fame not only to expand her horizons in film and modeling, but also to stand up for the greater cause of combating body shaming.

Rousey announced to fans on Instragram that while she will be taking some time, most likely to refocus and train, she will be back.

Rousey has not only broken gendered barriers changing the status quo, but has worked hard to rise to the top. Don’t be afraid to be knocked down – go out for what you want and don’t stop working until you reach your goals.