You are here: Home / Communication / Make Your Presentation Stick With a Tough Crowd: 3 Steps

The average audience can only concentrate on what someone’s saying for 90 seconds before looking at their phones. Now take those odds and combine them with a tough crowd.

What can you do when you’re met with nothing but the sound of crickets?  Or worse yet, when you’ve got a bunch of people who are strongly against the changes you’re about to implement? 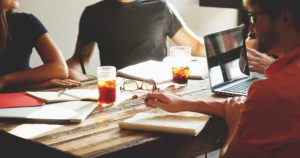 Here’s how to tackle tough situations you could run into:

We’ve all seen it before: That one person who has to question everything. But use this to your advantage. Twist challenges the right way and they can actually work in your favor.

When a tough question pops up, it piques the audience’s interest. That means people who were only sort of listening are now all ears. It’s dramatic – suddenly, there’s a lot at stake and everyone wants to know how you’re going to handle it.

Respond with, “Thanks for raising that point” or “I appreciate where you’re coming from.” It’ll show the group you’re ready and eager to respond by acknowledging the person. Then address the issue.

Boom! You’ve instantly won over the room. Suddenly, your role as a poised, successful leader has been strengthened.

Show you’re on their side

Whether it’s one of your employees or a big client, no one wants to hear this phrase. No one’s going to listen to what you have to say if they don’t think you understand the core issues behind it.

Say, “Tell me more” so you can have an effective but calm discussion.

Or avoid this situation all together by mixing up your routine: Instead of ending with the Q&A, start with it.

This’ll show your audience that you have one goal in mind: Addressing their concerns. Go around the room and ask each member what he or she is doing here, and what their thoughts are.

Bonus: If you aren’t going to tackle a certain issue someone raises during the Q&A, this is the perfect time to say so. This way, they aren’t focused on it – and bringing up – during your presentation.

What’s the most boring part about a speech? The fact that it’s a one-way street. No one likes being talked at. And if you’re hearing crickets, it could be because you’re doing all the talking.

Then, throughout your presentation, stop and invite people to talk. Once the first person takes the plunge and starts talking, others will follow.

It’s never easy to stand up in front of an audience, especially when you know you’re going to be met with a tough crowd. But expecting hurdles beforehand – and knowing how to tackle each one – will ensure your presentation leaves its mark.