You are here: Home / Featured Home / Pay equity: Every woman in leadership needs to read this

What can you – as a woman in leadership – do to close the gender pay gap for yourself, and other women? Many of you may want to address pay equity issues at your own company but find it difficult to figure out where to begin.

The good news is that things are changing with regard to helping women to get paid equally. Pay equity is no longer just the smart thing – and the right thing – for companies to do. It’s becoming the law in many states and cities nationwide. 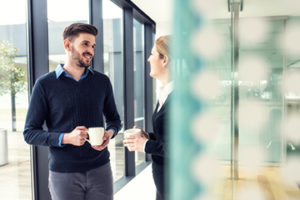 While all states have to comply with the federal Equal Pay Act of 1963, whose purpose was to pay men and women the same wages for equal work, almost all states have equal pay laws on the books. But many of these state laws were enacted a long time ago and have not had much impact. (Employment firm Fisher Phillips has launched a Pay Equity Interactive Map, which highlights each state’s law.)

However, a handful of states have become pioneers and have taken pay equity to the next level in 2018 –California, New York, Maryland, Massachusetts and, most recently, Oregon (as well as a number of cities including New York and San Francisco). Lawmakers in these locales have reviewed and strengthened their laws.

Yes, the commitment to pay equity’s here to stay. But the question for every woman in leadership is: “What can I do to correct this problem in my own company?” First, let’s see how some companies have stepped up and shut down the pay gap.

In July, Nike was in the news after four women sued the sportswear company for wage disparities. As a result, Nike raised the salaries of more than 7,000 employees. And Nike is certainly not alone.

Hundreds of companies, including Starbucks, SAP, Adobe, Apple and Accenture, have closed their gender pay gap.

“There’s no excuse,” Salesforce CEO Marc Benioff told CBS’ 60 Minutes when asked about the wage gap. His company spent millions of dollars rectifying the pay gap after two female employees – executive VP of HR Cindy Robbins and senior VP of customer support Leyla Seka – challenged him. He accepted the challenge and found disparities amongst his 17,000-person workforce and increased wages by $3 million annually.

4 ways to level the paying field

So how do companies tackle their pay gaps? Here are recommend ways to get your company pay-equity ready:

Shine a light. At Salesforce, all it took was two women to make a difference. “CEOs, with one button on one computer, can pay every man and every woman equally. We have the data. We know what everyone makes,” says Benioff. Whether your company has created a policy to deal with pay equity or not, “the winds of change are upon us and it’s critical to start revising your hiring practices … or you may end up breaking the law,” says Megan Biro, CEO of talent management site TalentCulture.

Conduct a pay audit: Efforts to close the pay gap often start with a pay audit. This can help a company to better understand their pay issues, where they exist and their root causes. If this cannot be done in-house, consider bringing in an expert. “Consult with a reputable, smart, up-to-date legal team, craft a strategy to get ahead of pay equity legislation, and get your recruiting, hiring and HR teams on board,” says Biro. A legal team can help develop programs and policies and conduct a pay equity audit, which more and more companies are doing. Many also use certifications, such as EDGE (edge-cert.org) to ensure their pay equity analyses are by the book.

Document pay discrepancies: “Documentation is the saving grace for employers,” says Kara Govro, laws manager at HR consultant Mammoth. The law makes exceptions for companies that pay employees performing the same job different salaries if they have different skills and experience. This includes having a seniority system or a merit system based on performance evaluations, as well as exceptions for education and training. But this must all be documented.

Be transparent. Consistently analyzing pay data and initiating conversations with employees about their pay is the only way to ensure that they – and, in particular, the women in the company – will understand that the company is taking steps toward achieving pay equity. That’s why the results from a pay audit shouldn’t be known only to those who conduct the audit. It’s best to bring all the leaders in the company on board with the audit process and to be transparent with the employees on the results of the audit.

“We cannot wait 100 years for pay equality to become a reality,” says Salesforce’s Robbins. “It’s up to every business leader to take action.”

If it only took two women at Salesforce to make a $3 million difference at their company, this begs the question, “What can each of us do to affect change at our companies?”

(Adapted in part from California’s Pay Equity Law Gets Clarified: What Every Employer Needs To Know by Meghan Biro at Forbes)