You are here: Home / Leadership / No More Gaps: Inspiring Different Generations to Work Together

Overseeing a large group of employees can be a challenge to even the most seasoned managers. Women leaders in particular tend to pay close attention to how our employees operate on more personal levels.

Since women are more likely to be attuned to other’s feelings and moods, we tend to recognize if someone if feeling stressed out, or if a conflict between two employees is simmering. 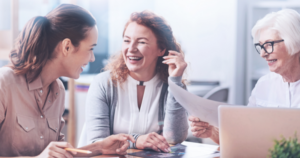 Employees of different generations who work closely together could be a source for that conflict. A Progressive Women’s Leadership phone poll revealed that many women leaders struggle to deal with age gaps while managing large groups.

Since they all have to work together on a regular basis, certain situations give rise to frustrations. For example:

“Darren is just so slow; I feel like I have to pull teeth to get his reports, and I can’t finish mine until he turns them in!”

“Katie just assumes everyone knows our new software as well as she does, but I didn’t get to use the program at previous jobs like she did.”

As leaders, it’s our job to inspire employees from different generations to set aside differences in work ethic and find common ground.

How to Fight Generational Conflict

You can’t help the preconceived ideas people have about those who represent a different generation. Some of these ideas are founded (intentionally or not) in representations of generations in the media. For instance, older workers are stubborn and resist change; younger workers “slack off” or don’t act professionally. While these stereotypes might make for good comedy, in the real working world, they can hinder your workplace dynamic and drain productivity.

Your challenge as a leader of cross-generation employees is to get them to work together, while helping them both understand what the other brings to the table. The good news is, it’s completely possible if you keep these five ideas in mind:

Fostering work camaraderie between employees of different generations can sometimes be sticky. But when you focus on the positive aspects of your team’s diversity of age and experience, it sets the tone for both groups to work together with mutual admiration and respect.