You are here: Home / Featured Home / New proof: ‘Nice’ girls finish last … in the hunt for a new job 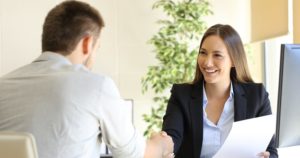 “Caring,” “kind,” “friendly” – who wouldn’t want to be described this way? You … if you’re hoping to land a new job (or help a mentee secure a new position).

New research shows these “communal words” are used to describe women more often than men in job references – and make them less likely to get the job.

So say the folks at the Harvard Business Review, who recently looked at language in both resumes and letters of recommendations.

And we’re facing an uphill battle.

Take a look at what the research found and what you can do to reverse this trend, no matter which side of the job hunt you’re on.

It’s what they say…

One of the key findings: People were much more likely to use words like “exceptional,” “remarkable” and even “brilliant” to describe men. In contrast, folks tended to focus on demeanor when recommending a woman for a job, as opposed to highlighting her qualifications.

And companies are noticing … and passing qualified women over.

But it’s not just what’s being said – it’s the length of what they’re saying.

Recommendation letters for men tend to be longer than one for women. And that tips the scales more favorably in male candidates’ favor as well, as they’re perceived as a superior endorsement.

What can you do?

But as a female leader in your workplace, you want to head off gender bias from the start.

No matter which role you’re in, simply being aware of this phenomenon can help you be more deliberate in your word choice.

Remembering to focus both on the length and the descriptive words in your writing will help you land that new position you’re after – or help that woman you mentor do the same.