You are here: Home / Gender Partnerships / New Proof You Can Excel in a ‘Bro Culture’

As a woman leader, you won’t likely fit in the “Bro Culture” that exists in many organizations – and new research proves you’re better off for it.

You’ve probably seen the “Bro Culture” in different forms throughout your career  – from yesteryear’s “good old boys club” to the fist-bumping, inexperienced men at the helm of some organizations today – and may have bristled at and fought its existence.

But it turns out women have some advantages they can capitalize on when working in a Bro Co. 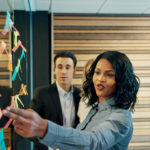 “Bros typically form tight, exclusive in-group ties,” says Morela Hernandez, a researcher at Darden School of Business at the University of Virginia. “And we might assume these groups exclusively favor males. But do they always?”

No way, says Hernandez, who’s new, co-authored study is in the Journal of Experimental Social Psychology.

Bros may want to talk about last night’s game or today’s sales numbers and grab a beer after work with the guys. But they’d rather hear critical and positive feedback from you.

Is it an affront or help?

Men are more open to feedback from opposite-gender colleagues and subordinates, the study found. They want to know what you think – and usually respect it, especially is it’s given with an intent to improve the organization.

Here’s the biggest (and perhaps crazy) reason why: Men sometimes see feedback and suggestions from male colleagues as an affront, not help. Their ego gets bruised by what they hear as criticism from their “bro.” Then they shut out what could be useful information.

On the other hand, they’re more likely to be thankful when a woman in leadership gives them useful feedback and suggestions. And that puts you in a position to get your voice heard and ideas accepted more often.

Give the best possible feedback

You can flourish in a Bro Culture (or any one, for that matter) if you give effective feedback. Here are six tips that will help: