SPECIAL NOTE: This is our inaugural “Inside the C-Suite” feature that will highlight women who lead the nation’s top companies. We hope it will provide practical, actionable information that is empowering and inspirational. Stay tuned for upcoming posts on other top women executives!

Mary Barra, who became the first woman CEO of one of the Big Three automakers in January 2014, was about 10 years old when she first fell in love with a car – her cousin’s vintage shiny red Chevy Camaro convertible. 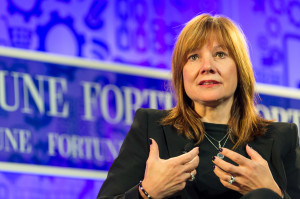 Tinkering in the garage with her dad, a tool and die maker at GM, only heightened her interest, leading to her desire to build, design, create, and eventually become an engineer. She began her career at the Detroit automaker as an 18-year-old college intern.

Mary has worked her way up through the ranks at GM since starting there 35 years ago. She’s held over a dozen positions, including executive assistant to the CEO, plant manager and head of global human resources.

Her first job: “I was as a quality inspector on the assembly line,” Mary told Esquire. “I was checking fits between hoods and fenders. I had a little scale and clipboard. I was probably examining 60 jobs an hour during an eight-hour shift. A job like that teaches you to value all the people who do a job like that.” She participated in a GM co-op program that helped pay her college tuition. Within three years after she graduated, she was off to Stanford University to pursue an MBA, sponsored by GM – a clear sign that she had been recognized as a high potential candidate.

On embracing fear: “Some of the best learning opportunities I’ve had in my career are when I initially went, ‘You want me to do what?’ or ‘You want me to do this role?’ Mary told Business Insider. “Seize the opportunity because you’ll learn so much. And it’s going to give you such a foundation to move on.”

On having a mentor: “When building your network of mentors,” she told LinkedIn, “be honest about your mid- and long-term career goals, and how hard you are willing to work to achieve them. Earn their respect and trust so they will be your professional champion…About six years ago I was asked to consider a cross functional role – vice president of global human resources. I was concerned it didn’t fit my engineering and manufacturing credentials. My mentors pointed out I possessed two very important attributes of the job – identifying talent and using teams to confront challenges. I accepted the position. It turned out to be one of the most important and impactful assignments of my career and one I might have missed if not for my mentors.”

Mary’s known for her interpersonal skills and team focus, cut-to-the-chase style and focus on the customer. These skills helped her navigate through the first few months of her CEO role, when she was tasked with leading her company through a federal investigation regarding a faulty car ignition switch which resulted in recalls of 30 million vehicles. But she still led the company to a record sales year.

On tackling problems: “I want bad news – the sooner the better,” she told Esquire. “I want it when the person closest to it realizes there’s a problem. Almost every problem at the start is solvable. The longer it takes to solve, the higher it gets in the organization and the bigger the problem gets. That problem is going to get bigger in six months, in two years. But it’s not going to get smaller with time.”

On being assertive: “Wherever you are in your career,” she told refinery29, “your first position, or a manager, or even an executive – you have to be ready to stand up for yourself. But, it should be done in a firm but respectful way. Always remember, respect is earned. Learning to read the situation is also important. Most of all, never waver on integrity. If someone calls you bossy because you didn’t let them push you around, so be it.”

On building your team: “Your relationship with your team is like any other relationship – you can’t build it the moment you need it,” she told Glassdoor. “You build it over time. It starts when you make it very clear what your values are and articulate a clear vision for your organization. It gets stronger when you live those values every day and deliver results. If your values are little more than words on a page, they won’t mean much to you or the people on your team. But when you do what you say you are going to do – in both results and behaviors – that’s when you begin to build trust and earn respect.”

On decision making: “When you have multiple points of view, you come out with a better answer,” she told the Los Angeles Times. “If we don’t have complete unanimity, I have no qualms about making a decision. But I want vigorous debates. I want tension in a constructive way to make sure we evaluate things from every angle.”

The married mother of two is an early riser, often in the office by 6 a.m., but “family has and always will be priority for me,” she’s said. She believes in hard work and a team effort. She’s known to call her staff together on a moment’s notice to brainstorm on pressing issues and end meetings to get to her daughter’s soccer game.

On work-life balance: “I actually feel like I come to work stronger when I’ve had a little time on the weekend, to step away from it and enjoy my family and other things,” Mary told Business Insider. “I come back energized. If people think they’re going to work 24/7, week in and week out, they’re not bringing their full strength to the table. We need to find the opportunity not to do everything, but to do the important things.”

Her core principle: “Whatever job you’re doing,” she told CBS News, “just own it and do it like you’re going to do it the rest of your life. Because that’s what I tell people: do your best and good things happen.”

Mary holds a unique position in charge of a traditionally male-dominated company. While her career trajectory may not be the norm, her career advice is transferable to all women.

Finding your passion: “My parents encouraged me to work hard and pursue my early love of math,” she told refinery29. “There is truth in the expression that hard work beats talent when talent doesn’t work hard. Another reason this was great advice is that it steered me toward a career in engineering at a time when few women were pursuing work in the science, technology, engineering, and math (STEM) fields.”

On working with mostly men: “I don’t go into a room and take count,” she told The New York Times. “I want to be recognized for my contribution and for what I do. Yeah, there were probably times it was to my benefit, and there were probably times when it was not to my benefit. But that is true for everyone. There are always things that potentially impact how you are received. And I just don’t focus on it. I don’t focus on what you can’t control.”

Getting a fair wage: “Far too many women are not fairly compensated,” she told Glassdoor. “If this is true for you, discuss it with your manager. Be positive. Document your achievements and experience. Talk about how you can move the organization forward and ask for opportunities to show what you can do. If more money is not an option at the moment, ask for other forms of compensation as an interim step, like assignments that broaden your skills or high-profile projects that allow you to work with senior management. In the end, focus on being the best at what you do. That’s the most effective way to advance your career.”