You are here: Home / Featured Home / The best person a woman leader can mentor? A man 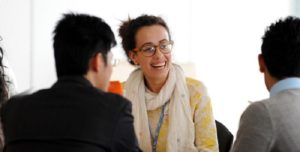 minute: Who were the mentors you’ve had as you’ve progressed in your career? Chances are a large proportion of them were other women. Maybe all of them were.

Now that you’re at a point in your career to be the mentor instead of/as well as the mentee, there’s one thing you can do to advance gender equality in your workplace:

Take a man or two under your wing.

That’s the advice Michael Chamberlain, VP of events with Catalyst and the Men Advocating Real Change (MARC)  community, gave to a room full of female leaders at the recent Pennsylvania Conference for Women.

And while his statement initially made many do a double-take, Chamberlain made a compelling case.

Here’s how you can make the most mileage out of mentoring men.

Sad but true: When it comes to establishing true and lasting gender equality in the workplace, women can’t make it happen on their own. And the numbers back that up.

In fact, research shows that when men are actively involved in gender diversity, almost all (96%) of companies report they’re making progress. Compare that to less than a third (30%) of companies where men don’t participate.

Men and women need to work as partners to see that everyone has equal footing in meetings and on the org chart.

As a woman leader, by serving as a mentor to male co-workers you show them early in their career that women are capable competent managers. You’re reconditioning a whole new generation of men to view women in the workplace as they really are, without unconscious bias.

It’s playing the long-game, for sure. You won’t necessarily see dramatic change overnight. But it will happen.

Bonus: Mentoring men gives you new insight into how they think in the workplace.

Of course that doesn’t mean you leave your female proteges out in the cold. Women need other women to serve as models, act as sounding boards and advocate for them. But think about mentoring folks of both genders.

So have you even been a mentor to a male colleague? Share you experience in the comments section below.