You are here: Home / Leadership Skills / Make Up Your Mind: The Informed Decision Maker’s Guide

A special report from the Pennsylvania Conference for Women

Got a big decision to make? Maybe this can help…

When it comes to decision making, women have an advantage, said psychologist Therese Huston at the “How We Decide” breakout session at the recent Pennsylvania Conference for Women. 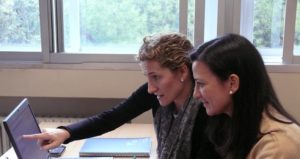 Huston, author of How Women Decide: What’s True, What’s Not, and What Strategies Spark the Best Choices, pointed out the following research that indicates better decisions get made when women are involved in the process:

What is it about having more women in key roles that leads to better decisions? Well, as most women are probably already aware, we generally like to explore options and discuss concerns before making a decision, where men frequently like to get it done and on the next, possible erring on the side of expediency.

But now that science is backing up what’s been working for women all along, we can all make better, more informed decisions.

Women have more social sensitivity – the ability to “read” others’ reactions, research has shown. For instance, in a meeting, women will pick up more than men on dissenting opinions by noticing others’ body language and facial expressions. Women, more times than men, will query that hesitant-to-speak-up person that just may have something valuable to offer. “A woman cares more than men about a win-win outcome,” said Huston.

While men are just as successful at decision making when they summon up their own social sensitivity, Huston adds, “women tend to be more motivated to do it.”

Generally, women are more collaborative in leadership roles. “A female boss is more likely to ask the opinions of those around her when making a choice,” said Huston. “Women ask for input, which has been shown to help you make better decisions.”

Huston offers you some useful strategies on how to improve your own decision-making skills:

Double down with the power of 3. “When we make decisions, we often give ourselves just two options to choose between,” said Huston. Add a third, she said, because research shows that people’s satisfaction levels five years down the road are higher when they give themselves several options when making big decisions.

Say yes to the naysayers. If a decision is complex, be willing to seek input from people who might not necessarily agree with you. They can provide valuable clues, she said, as to a better outcome.

Lead the discussion. While you’re soliciting opinions, make it clear that it doesn’t get mistaken for indecisiveness, said Huston. You might say, “Let’s meet to discuss options on Monday and I’ll make my decision Tuesday.”

Did reading this help you to make a better decision? We’d love to know! Please email to share your thoughts on this feature.