You are here: Home / Community / Leadership Envy—Do We Really Have Each Other’s Back?

You’ve risen through the ranks at your workplace after years of hard work. You love what you do and who you work for. And to boot, you’ve had the company of some other great women to work alongside as you climbed to a top position.

So why do you get the feeling that a few of those women are constantly trying to undermine your authority?

It might be growing disagreements in meetings on your project plans. Or you’ve implemented some new rules, but notice that some of your female peers seem to think those rules don’t apply to them. 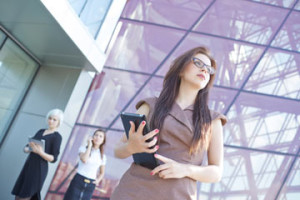 It’s an awkward position to be in, to be sure. But even if you’re not the woman at the very top, it’s important to recognize how leadership envy in others (and ourselves) can slam career doors shut.

Do some women undercut other women’s success? Yes, and there are many theories as to why. One theory goes that, because it’s usually harder for a woman to work her way to the top in business, some women managers may hold their peers down to better secure their own position. A story published in News.com.au quoted a relationships expert as saying three factors were part of the force behind this: jealousy, insecurity and competition.

Despite our progress, the myth of the “catty” woman persists, resting on the idea that something inherent causes women to undermine each other on the job, say Sheryl Sandberg and Adam Grant in a June essay in The New York Times. We’re “too competitive” to want to help other women get ahead, the myth goes, as if career success were a zero-sum game of Monopoly.

Understand Where It Comes From

It can happen where you least expect it. At first the women on your team are your allies, but can later turn on you once you start making a name for yourself. You might not be able to prevent this from happening, but it is important to recognize when the atmosphere goes from collegial to toxic. Should you find yourself caught in combative crossfire, follow your leadership instincts and avoid shooting back.

It helps to be mindful of how women approach competition. By our nature, we often don’t rise to a competitive career situation the way men do, says business writer Marianne Cooper in a recent article in The Atlantic, “Why Women (Sometimes) Don’t Help Other Women.” Men are considered more “natural fighters,” and thus feel less threatened by other men in positions of power around them. Even some seasoned women leaders can become insecure, which can lead to backbiting behaviors, says author and counselor Barbara Archer.

More women getting ahead in business is a good thing. We can’t (and don’t) want to fight it, so to keep your work environment from becoming a fertile ground for career envy, take these three courses of action.

Promote a culture that says there’s room for everyone. It’s hard to think this way when you’re in competition with three other women for one promotion, for example, or when someone you supervise clearly wants your job. But if you assume the attitude of “So what if she got that promotion/title; there’ll be others,” other women will recognize your patience, loyalty and integrity.

Find a way to align with women peers. Even the most efficient managers can’t do it all. Note projects the projects of higher women managers that you could help with; they could be critical stepping stones to a permanent in-charge position. And if you’re in charge, pointedly enlist the help of women who work for you. Promoting their value doesn’t diminish yours. And it’s hard to back-bite against someone who asks for your help.

Stay out of the fray. Above all, avoid gossip about new woman bosses and presumptions on how they got to the top (whose business is it anyway?) Resist reinforcing unfounded stereotypes about women you work with (e.g., generalizations like “She’s got no idea what she’s doing!”)

We can always be forces of good for female workplace camaraderie. Once we let go of thinking about achievement at work as one big grudge match, doors to career success will open more freely.