“My mother would always remind me: ‘Where you are is not who you are’,” Ursula Burns, Xerox CEO, often says. “If you’re in a bad place, it’s only temporary and shouldn’t change the core value of what you can bring to the world.”

Growing up in a New York City low-income housing project, this now top corporate executive has clearly not lost her roots. She defines herself today as “mother of two and wife of a great guy,” she told Fortune. “I happen to be the CEO of Xerox.” 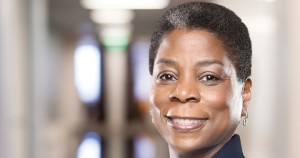 And this just happens to be a job that made her the first African American woman to lead a Fortune 500 company. When she was got this job in 2009, it also marked the first time a woman CEO – Anne Mulcahy – stepped aside and named another woman as her successor.

So how did this executive rise through the ranks from such humble beginnings?

Ursula’s single mom was “desperate,” says Ursula, to make sure she and her brother and sister were well-educated, even on a modest salary, running a daycare in her home.

Her early education: “My mother spent a lot of time and the little money she had in making sure we had the best education,” Ursula told the American Society for Mechanical Engineers (ASME). “For us at the time, it was going to a Catholic school in the poor neighborhood we lived in. It was the best school.”

Finding her passion: “I was pretty good at math,” Ursula told ASME. “When it came time for me to go to college, my guidance counselor told me I could be a teacher, a nun or a nurse. I decided to do some research on my own to find out what people who like math can do for a living…The long and short of it is I lucked into engineering.”

Attending college: She’d found her passion and received a scholarship, yet wasn’t prepared for the tough college-level coursework at Polytechnic Institute in Brooklyn, where she had to travel out of her borough and felt out of place in her classes made up of predominantly white males. So she took the necessary catch-up classes in order to master her workload and graduate with a degree in mechanical engineering, followed by a master’s degree at Columbia University.

Her path to power

She graduated college some 35 years ago when “women CEOs were nonexistent” and “black women CEOs were unimaginable,” she recently told a graduating class at the Rochester Institute of Technology. “I can assure you that at my commencement, no one was pointing at me and predicting that I would become CEO of anything.”

So how did Ursula rise to power?

Her internship: Her program at Columbia was specifically created for minority students, and partially funded by Xerox, where she took a summer intern position in the engineering department.

Her early jobs: She started her career at Xerox working in product development and planning, where she’d often impress upper management at meetings. “If you have an opinion, you should make it be known,” says Ursula. That’s how she got on an executive’s radar and was offered her first job as an executive assistant, when she began to learn early leadership lessons on how to manage people indifferent ways, not to intimidate people, and to make them feel comfortable by listening carefully. Her second executive assistant job was offered to her after she spoke up to her future boss, who had just announced, “We have to stop hiring.” Ursula said to him at the monthly meeting, “I’m confused. If you keep saying ‘No hiring’ and we hire 1,000 people every month, who can say ‘No hiring’ and make it actually happen?” Ursula learned more leadership tips from him “like giving people credit for ideas that they didn’t have, but you sold to them, to give them ownership,” she told the New York Times.

Her leadership roles: Ursula quickly made her way through the ranks at Xerox, overseeing several areas of the company – engineering, manufacturing, product development and marketing. She then became corporate vice president in 1999 and senior vice president of strategic services in 2000, followed by president of the Document Systems Solutions Group in 2001. In 2007, she was named president of Xerox, grooming her for the top spot two years later.

Her next chapter: At the end of the year, Ursula’s new role at Xerox will be chair of the document technology division when Xerox splits into two separate companies.

“Trust and listen to your team,” Ursula told Fortune. “This has helped me become a more effective leader.” And she adds, “I am still learning.”

But what else has this accomplished woman learned through the years?

Leading a diverse workforce: “Many things I had to learn through life to be a leader of a large corporation,” she told ASME. “One of the most interesting was how to deal with people who are not engineers. Engineers have a characteristic of having an organized thought and approach to a project that’s process-based. So you do have to learn how to include other disciplines into the problem solving process and into the leadership process.”

On having/being a mentor: “It’s important to have them and to be them,” Ursula told a Catalyst conference in 2013. “Women need mentors more than men.” She’s had mentors, including Vernon Jordan Jr., former Xerox director and civil rights leader, and Kenneth Chenault, chief executive of American Express. Former Secretary of State Henry Kissinger has been a kind of a sponsor, who asks her to events where she’ll meet people she would simply never meet otherwise, she says.

Leading and learning through crisis: Ursula was one of 100 executives offered a severance package in 2000, when Xerox was on the brink of bankruptcy. She’d decided to leave, but changed her mind and now considers those crisis years to be “the best experience ever” because she was required to make decisions rapidly and respond to tensions as quickly as possible, sometimes with the fate of the company on the line. “I don’t think I could have been trained better at business school,” she told an audience at a 92Y event in New York. “Never waste a good crisis. If you’re thrown into it, don’t run away from it because it’s probably one of the best experiences you can have.” In the aftermath, she found out how much Xerox valued her. Board members told her if she left, others would take it as a sign that the company was unsalvageable. “That was the first time I said, ‘Oh maybe at some point I could actually become the CEO’,” she told the New York Times.

Ursula lives in Rochester, NY with her husband, a retired Xerox scientist who is 20 years older. They have two grown children. She often jokes to ambitious women who want to achieve all their career goals: Find a good, older husband. The age difference proved advantageous for Ursula, when her job required her to travel frequently, leaving their two young children in the care of her retired spouse.

On raising kids: “Kids are pretty resilient,” she told the Wall Street Journal. “You don’t have to be at every volleyball game. We can’t guilt ourselves.”

On staying grounded: “I continually go back to the basic stuff,” she told the Wall Street Journal. “Be prudent. Enjoy it.”

On doing it all: “Achieving women believe they have to be outstanding every single day at being a parent, spouse and contributor in your work environment,” she told ASME. “If you are trying to do that, you are going to crash and burn and very likely not be outstanding at any of it. We have this strange view that’s not realistic about how we should parent, take care of ourselves or partner to our spouses. We have to define that for ourselves and not let society do it for us.”

“I want people to know that engineers and scientists look like me,” Ursula wrote in a Facebook post for the Clinton Global Initiative. “That’s who I am — a regular person born on the Lower East Side of Manhattan who happened to luckily engage in a set of educational initiatives that ended up in degrees in engineering. That shouldn’t be by luck.”

“I’m a bit of an anomaly,” she told students at a Columbia University commencement. “Even an entire generation after I became an engineer, there are too few people of my gender and race entering the profession.”

That’s why she is active in STEM (science, technology, engineering and math), and was appointed by President Barack Obama to help lead the White House national program on STEM and why she is founding board director of Change the Equation, collaborating with schools, communities and states to ensure that all students are STEM-literate.

On taking responsibility: “Stuff that happens to you, please, let’s talk about it for five minutes, and you can cry and let’s go through that, the healing process,” she told the New York Times. “But then it’s kind of done. I can’t hear about that two years from now.”

Her strongest influence: “It’s 150% my mother,” she told the New York Times. “My mother was pragmatic, focused and extremely, exceedingly practical, and she was the ultimate self-determined person.”

On being successful: “My mother was very, very black-and-white and very clear about what responsibilities we had,” she told the New York Times. “One was that we had to be good people. And the second thing is we had to be successful. And so her words for success were, ‘You have to give’ – and she would say this all the time – ‘more than you take away from the world’.”