Irene Rosenfeld, who’s been consistently ranked one of the most powerful women in the world, stepped down in November from her 11-year stint at the helm of Mondelez International, the $26 billion maker of Oreos, Triscuits, Fig Newtons and other snack foods.

Many industry insiders call her a trailblazer. A 36-year veteran of big food companies, she was hired as CEO of Kraft Foods in 2006 to revive the struggling company, so she acquired British giant Cadbury chocolate in 2010 through a hostile takeover and spun off Kraft’s snacks division in 2012, creating Mondelez, now one of the largest snack companies in the world. 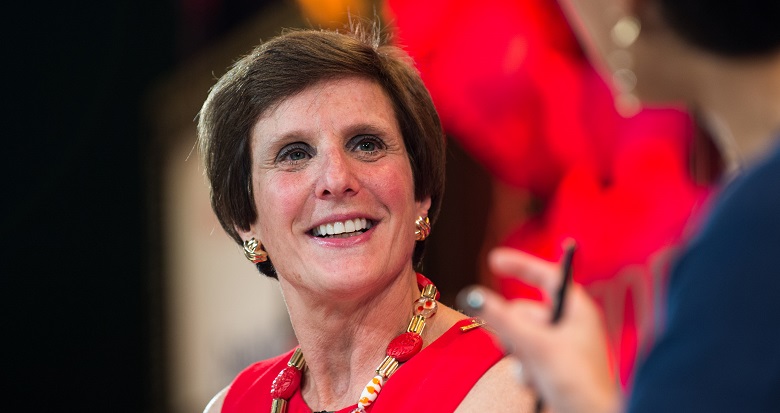 Irene’s done a great deal to champion women in the workplace: three of her female employees have gone on to become CEOs of major companies, including Denise Morrison of Campbell Soup,  Michele Buck of Hershey and Elizabeth Smith of Bloomin’ Brands. But she’s been preparing for her leadership role from the very beginning.

Early overachiever: Irene grew up in Westbury, New York, a Manhattan suburb, the daughter of an accountant and homemaker, who “taught me a lot about the value of working hard,” she told The Independent. She excelled at everything and grew up fantasizing about becoming president of the United States.

Laying the groundwork: One college degree was not enough for the intelligent Irene, who’d been set on a life in academia until a professor made her realize she had an aptitude for business and finance, perhaps because she cunningly stapled dollar bills to one course project questionnaire and got a better response than everyone else. When she left Cornell University, she equipped herself with three degrees: a bachelor’s in psychology, a master’s in business and a Ph.D. in marketing and statistics. She got into business and never looked back.

Her competitive nature: “I grew up in the industry at a time when there weren’t that many women and in key positions,” Irene told The New York Times. Starting her career in the 1980s, Irene felt her athletic ability – she played basketball, softball, hockey and volleyball in high school and NCAA basketball at Cornell – gave her an edge at tennis and golf company retreats. “I held my own in a lot of these corporate outings,” she said. “I came with a sharply honed competitive instinct.”

Irene started her career conducting consumer research for the ad agency Dancer Fitzgerald Sample and worked for General Foods before the company became part of Kraft. “Aspiring to do something important was important to me,” Irene told Joann Lublin in her book, Earning It: Hard-won Lessons from Trailblazing Women at the Top of the Business World.

Asserting herself: Halfway through Rosenfeld’s six-week maternity leave from her job as group product manager for Kool-Aid at General Foods, she visited her office to see that a fellow product manager had moved his belongings and furniture into her office. She quickly told the building’s custodian to move it back, but this incident bolstered her view that women must act more assertively: “Be prepared to toot your own horn,” she told Lublin.

Taking charge of her career: She took that same assertive approach when the top job in the company’s Kool Aid business opened up: “I went in and said, ‘I want it.’” And she got it. Sales grew for the first time in 10 years.

Her big break: When her boss at Kraft asked her what company job she’s most like to have, she had a ready answer (she wanted to run Kraft Canada) even though she knew there was no opening.  But two weeks later, she got the call. “Women ask not for what they want, but for what’s “available’,” she says. “That’s a mistake. If I had not raised my hand, I’m not sure it would have come my way,” she told Chicago Sun-Times.  “Know what you want, be prepared, and ask for it.”

As she rose up the food chain at Kraft, Irene was faced with personal challenges when her husband died at the age of 43, leaving her to raise her two daughters alone (she’s since remarried), although she told Independent, “Parenting is one of the best management training programs there is.”

Breaking barriers: Coming up in an industry with few other women in leadership roles, “We had to stand up for ourselves in the face of managers who weren’t as respectful as they ought to have been,” she told Financial Times. “There was always a sense that we needed to work just a little harder.”

Rising to the top: “The fact of the matter is, if you perform the rest does take care of itself,” she told Pivot Points. “At the end of the day, it’s all about whether you are competent and whether you can deliver.”

Taking risks: “ You simply can’t steal second base with your foot planted firmly on first,” Irene told the graduating class at Cornell. “You have to be willing to take on the tough jobs, including the ones nobody else wants, to stand out from the crowd.” That’s what builds skills and character, and gives you exposure to senior management, she says.

Since becoming president of the United States was once a dream of hers, Irene was asked by the Chicago Tribune, “Might she go into politics now that she’s retiring?” she responded, “Never say never.”