Indra Krishnamurthy Nooyi is an India-born, naturalized American, a business executive and the current Chairperson and CEO of PepsiCo, the second largest food and beverage business in the world by net revenue. She hit the #14 spot on the Top Power Women CEOs on Forbes’ List for 2016.

Indra’s success in STEM fields started early, when she earned bachelor’s degrees in physics, chemistry and mathematics from Madras Christian College in 1974 and an MBA from Indian Institute of Management Calcutta in 1976. She was admitted to Yale School of Management in 1978 and earned a master’s in Public and Private Management. 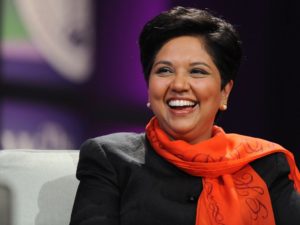 Her first jobs: Beginning her career in India, Nooyi held product manager positions at Johnson & Johnson and textile firm Mettur Beardsell. While at Yale, she completed a summer internship with Booz Allen Hamilton. While studying at Yale, she worked as a receptionist to earn money to buy a dress for her first job interview out of Yale after completing her Master’s degree. Graduating in 1980, Indra joined the Boston Consulting Group (BCG), and then held strategy positions at Motorola and Asea Brown Boveri.

Her rise to the top: Indra landed with PepsiCo in 1994 and was named president and CFO in 2001. She’s directed the company’s global strategy for more than a decade and led PepsiCo’s restructuring, including a 1997 divestiture, the acquisition of Tropicana in 1998, and the merger with Quaker Oats Company, which also brought Gatorade to Pepsi Co. In 2006 she became the fifth CEO in Pepsi Co’s 44-year history, and was named the 3rd Most Powerful Woman in Business by Fortune in 2014.

On women helping women: “I don’t believe women help women enough in the workplace,” Indra told the NY Times Women in the World Forum. “We ought to be helping each other out. The sisterhood has to become stronger than it is today.”

Managing a corporate family of more than 300,000 employees, it’s no wonder Indra is considered one of the top influential leaders in business. During her career, Indra explains that she adheres to a 5 C’s Model of Leadership: competency, courage, confidence, communication skills and compass.

On embracing change: Indra pulls no punches when she stresses how important it is to accept and adapt to change: “In the past, being decentralized was our strength, but also our weakness,” she told Harvard Business Review. “It’s a fine approach when the whole world is growing and life is peachy. But it doesn’t work when things are volatile and you need coordination. I told everyone that if they don’t change, I’d be happy to attend their retirement parties.”

On developing a leadership style: “Our approaches to things, or our statements may be a little different,” Indra told FastCompany. “But … we’re all focused on doing a great job. So as long as we accept each other for the job we are doing, as opposed to you’re a woman, you’re African-American, you’re Latino, it’s irrelevant. We have a common purpose.”

On ‘reinventing’ a company/brand: “No question about it,” she told HBR. “The cycles are shortened. The rule used to be that you’d reinvent yourself once every seven to 10 years. Now it’s every two to three years. There’s constant reinvention: how you do business, how you deal with the customer.”

Relationship-building drives a large part of Indra’s success and work ethic. She told CNN: “If you only want people to help you when you need them and [don’t] have a relationship with them, they don’t know where you come from.” To firm up her relationships with employees, Indra has even written to her employees’ parents to get to know them better.

“If I had to write a letter to myself as a younger person, I’d say, ‘Be careful about all the choices you’re making, because you will look back and it will hurt like hell.’” – told to New York Times Live.

On staying humble: Indra related a funny but telling anecdote to The Atlantic Magazine about her mother’s reaction to her success: “I [told my mother], ‘I have great news … I’m going to be president of the Board of Directors.’ And she said, ‘Let me explain something. You might be president of PepsiCo. You might be on the board of directors. But when you enter this house, you’re the wife, you’re the daughter, you’re the daughter-in-law, you’re the mother. You’re all of that. Nobody else can take that place. So leave that damned crown in the garage.’”

Asked by Forbes for the best career advice she’s heard, Indra said embracing the hard stuff is what will get you noticed. It goes against the conventional wisdom, since it’s easier to take the path of least resistance, take easy gigs, do them well, and move up the ladder. “The problem with that is that nobody notices when you do an easy job well,” she says. “It’s better to … raise your hand for the toughest assignments and work to solve problems that no one else has been able to solve.”

On learning from Steve Jobs: “In 2006, when I became CEO, I spent some time with Steve Jobs at Apple,” Indra told FastCompany. “When he talked about design, it was how he lived and how he thought. He thought about design vertically and horizontally. Every aspect of Apple, he worried about it as an experience.”

On women’s rise in business: “We’ve come a long way,” she told FastCompany. “When I started working my first jobs in consulting in 1980, many times you’re the only woman in the room and you could feel the guys rolling their eyes when the women talked. Today … we have the numbers. Women have begun to call the guys out. They still roll their eyes, but you can now say, ‘what are you rolling your eyes for?’ I think the debate and the discussion is more overt, that’s good news.

On creative approaches to get ahead: Women need to think creatively and push for solutions to work-family balance, Indra told the NYTimes Women in the World Summit. “We’ve got to finish the business,” she said. “If we can’t finish the business ourselves, someone else is not going to finish it for us. I think the big unfinished business and the next revolution is how we can work together to address all these issues.”

We’d love your feedback! Share your thoughts on this feature in the comments section and let us know which top women leaders you’d like to read about next.