Our “Inside the C-Suite” feature highlights women who lead the nation’s top companies. We hope it will provide practical, actionable information that is empowering and inspirational. Stay tuned for upcoming posts on other top women executives.

Virginia Marie “Ginni” Rometty is the current Chairwoman, President and CEO of IBM, and the first woman to head the company. Prior to becoming president and CEO in January 2012, she held the positions of Senior Vice President and Group Executive for Sales, Marketing, and Strategy at IBM. 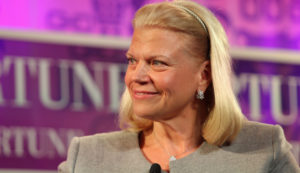 Chairwoman and CEO of IBM Ginni Rometty speaks onstage at the FORTUNE Most Powerful Women Summit on October 16, 2013 in Washington, DC. (Photo by Paul Morigi/Getty Images for FORTUNE)

Rometty is a prime example of the power of women in STEM fields. She joined IBM’s Consulting Group in 1991. In 2002, she helped facilitate the purchase of consulting firm PricewaterhouseCoopers for $3.5 billion.

Rometty’s story can also teach women who are steadily climbing their own ladder of success some important lessons: Learn from your mistakes before they harm your career, and always anticipate problems—it gives you the ability to put out the inevitable fires and grow from adversity.

Rometty became senior vice president and group executive for sales, marketing and strategy in 2009 and played a major role in spearheading IBM’s growth strategy by getting the company into cloud computing and analytics.

Her first job: At an early stage in her career, Rometty got herself used to working in traditionally male-dominated fields, and learned to adapt to how they operated. After graduation in 1979 from Northwestern University, Rometty went to work for General Motors Institute; in 1981, she joined IBM as a systems engineer in its Detroit office.

On her worst career mistakes: Being too cautious or unable to admit failures can sink even good careers, Rometty says. “It’s either when I didn’t move fast enough on something, or I didn’t take a big enough risk,” Rometty told a Fortune.com forum. “I mean, the worst mistake to me, though, is you don’t learn from your mistake. There is no greater sin than to not learn from it. And so I would say that’s the worst [mistake].”

On who inspired her: It’s actions, not words, that propel your career forward, Rometty believes. “My mom was a single mom, she hadn’t finished college, she worked nights because then she could go to school,” Rometty told Fortune magazine. “And my brother says, ‘Mom taught us by her actions.’ So I think actions speak louder than words; that’s one thing I think I always took from my mom. To this day, I think about that in everything I do.”

Rometty advises career-focused women today to pull themselves up by their bootstraps when facing adversity: accept risk, aim big and never let anyone else tell you what’s possible.

On creating your own leadership style: It’s fine to incorporate leadership traits of those you admire, but in the end you’ve got to represent yourself only, Rometty emphasizes. “Never let someone else define who you are. Only you define who you are,” said Rometty during her keynote speech at the Grace Hopper Celebration for Women in Computing, a 15,000-person conference in Houston in October 2016.

On diversity in the workforce: Diversity of many forms—of race, gender, background, etc.—exists in business just as it does in the rest of life, Rometty feels. “When I think about diversity, I actually think about the word inclusion. And I think this is a time of great inclusion,” Rometty told Fortune magazine. “It’s not men, it’s not women alone. Whether it’s geographic, your approach, your style, your way of learning, the way you want to contribute, your age – [diversity is] [a] really broad [concept].”

On being a change-agent: Never get stuck on something so much—an idea, a concept, a theme—that you can’t let go of it, even when you know it’s not working, Rometty says. “No matter what, you’ve got to focus on reinvention,” Rometty said in an interview with Fortune.

On looking to the future: Rometty boldly shared her vision for growing the economy with President-elect Donald Trump in a three-page letter released November 15. Chief among her points was the idea of building what she called a “new collar” job market: “The kind of jobs in demand in cybersecurity, artificial intelligence and data science can be taken by people trained in vocational schools. The President-elect has since selected her to advise him as a member of his Strategic and Policy Forum to stem the flow of job overseas.

On finding a passion: You’re never going to fully embrace your career unless what’s behind it is something you love doing, Rometty says. “I always say, at a really early age I learned you’ve got to be passionate about what you do,” she told BusinessInsider. “No matter what it is, [whatever] you put your heart and soul in, you have to be passionate about it.”

Her career advice: Growth and comfort never really co‑exist, Rometty advises. It’s the times when you’re most challenged that you’re truly growing career-wise. “Ask yourself, when have you learned the most? I guarantee it’s when you felt at risk,” Rometty told graduates of Northwestern University in her 2015 commencement speech. “So, when you feel anxious when you start a new job, I guarantee that’s a good sign. And this [has been] a really important realization throughout my career. I’ve always looked for challenges and I’ve found plenty.”

We’d love to get your feedback! Please share your thoughts on this feature in the comments section and let us know which top women leaders you’d like to read about next.