Yes, Denise Morrison was more than ready to become the first female CEO of Campbell Soup when she was tapped five years ago. Even at age 12, Morrison knew she wanted to run a business someday.

Her dad, an AT&T executive, shared his business knowledge with her and her three sisters when they were all still in grade school. And the Sullivan sisters learned well. They all became business executives, including Denise’s younger sister, Maggie Wilderotter, former CEO of Frontier Communications.

Dennis Sullivan taught them about negotiating (by swapping weekly chores with each other after picking slips out of a “job jar”) and writing a business plan (which Denise wrote to get herself a new bike). 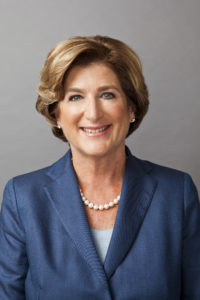 “I’ve been preparing to run a big company all my life,” Morrison told The Wall Street Journal.

But what career moves did Morrison – one of only 21 women at the helm of a Fortune 500 company – make to get to the top? Some very thoughtful, strategic ones…

Born to be the boss

Morrison’s dad and mom, a real estate agent, expected not only good grades from the girls, but a weekly book report as well. “My dad would say, ‘You are so lucky, since you can learn everything in that book that it took the author years to write,’” she said to Barron’s.

Morrison, who grew up in a seaside town along the Jersey shore, learned many other powerful life lessons:

Analyzing her failures: After failing to make the cheerleading squad, Morrison tried to analyze what went wrong so she could try again (an early leadership lesson from her parents). She concluded that she did not walk “gracefully enough,” as one teacher had said to her. So Morrison worked to correct that problem by taking long walks and setting her sights on becoming a baton twirler instead. She practiced twirling until she not only made the team but became its captain.

Adopting a can-do attitude: “In my household, you could not say ‘I can’t,’ My parents would say, ‘That is not in the dictionary.’ I saw no barriers. When I was looking for a job, I set my standards pretty high,” she told Joann S. Lublin, author of Earning It: Hard-Won Lessons from Trailblazing Women at the Top of the Business World (HarperBusiness).

“The thing I learned early on is you really need to set goals in your life, just like you do in business,” Morrison told The Wall Street Journal. And having that long-held goal of becoming a CEO led Morrison to make some strategic career decisions right from the very start:

Managing her career: When Morrison’s husband was offered a job in New York and she went to her supervisor to ask for a transfer within Procter & Gamble, she was offered a lower level job. Even though she was leading her division’s top sales team, she decided to cut her losses and move on. She found a comparable job at PepsiCo. “I learned then to manage my own career,” she told The Wall Street Journal.

Identifying the decision maker: When Morrison was a senior marketing executive at Nestle in New York and her husband was offered a CEO job in California, Morrison went right to top – the president of the company – and asked to be transferred. “In two weeks, the president got back to me,” Morrison told Forbes. “and he said, ‘You’ve been transferred to California.’ Two months later, I was promoted to Vice President of sales and marketing. Not only did I get the transfer, I also got a promotion out of it.”

Lobbying for a board seat: In the 1990s, when Morrison was Executive VP at Kraft Foods, she set her sights on adding a board seat appointment to her resume, so she traveled to New York and “pounded the pavement to understand how to get myself on a board of directors,” she told The Wall Street Journal. “I talked to a lot of recruiters to understand the criteria and skillsets that were required. I was politely told that ‘Well, we’re looking for sitting CEOs.’” And I said, ‘Well, there are only a couple women. They’re going to be really busy.’” Her unorthodox approach still got her a callback from one of those recruiters who offered her a board seat six months later.

Finding her way to the C-Suite: Her soaring ambition to become a CEO was something she publicly shared in The Wall Street Journal in 2007 to the surprise of many who thought it too risky: “I remember getting phone calls from people saying, ‘I can’t believe you said that. What if you don’t get it?’ and I’m like, ‘The thought never crossed my mind.’”

Getting to CEO required many mentors and sponsors, recalled Morrison: “I can cite numerous sponsors at different places in my career that made a huge difference for me just in terms of pulling me aside and giving me a tip or some coaching,” Morrison told The Wall Street Journal.

Getting ahead is all about nurturing relationships, says Morrison: 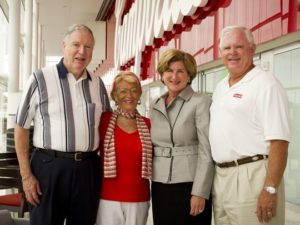 Small talk reaps big results: “Sometimes the truth hurt,” Morrison told The Wall Street Journal. Her boss at Nabisco pulled her aside and told her she “was so results-driven and so transaction-oriented that she wasn’t taken time to build relationships … I had been so conscious of being a working mother, of time spent on the job to deliver results that I interpreted time spent building relationships as fooling around as opposed to ‘No, that’s serious business.’ That was a huge ‘aha.’”

It’s exactly about who you know: “You always know somebody who knows somebody,” Morrison told The Wall Street Journal. “So call somebody that knows the person you want to network with and have them open the door. And then really understand that if they do this for you, you say to them, ‘At any point if I can do anything to help you, let me know.’”

“Working” a room’s just that: “Women have a hard time accepting that if they’re at a professional event or a seminar, part of the ‘work’ should be to connect with others,” she told Little Pink Book. “It takes just as much time to create a worthwhile business lead or professional contact as it does to craft a strategy or write a brief. Many people underestimate the power of a good network.”

When Morrison became CEO, her dad, who’s since passed away, congratulated her, then asked, “What’s your next goal?” as she wrote in LinkedIn. Morrison’s reply: “To build a great company.”