You are here: Home / Leadership Skills / How to Get the Promotion You Dream Of

Forget the glass ceiling. You might be the one thing holding yourself back from the position you’ve always wanted.

Even as women move up in their leadership roles, some let self-doubt creep in. Or they make self-depreciating comments that cause them to appear less qualified.

Eventually, many consciously or subconsciously stop pursuing the next promotion. Researchers in one study found that women’s desire for big jobs declines over time. Just 43% of experienced women say they want to be a top executive. Meanwhile, 53% of experienced men remain interested in the C-suite. 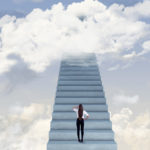 But women in leadership don’t have to look far to see that confident woman get ahead – and can get ahead early in their careers. Sheryl Sandberg became Chief Operation Officer of Facebook at 45. Marissa Mayer became Yahoo President and CEO in her late 30s. Amy Hood was in her early 40s when she became CFO at Microsoft.

Skills, knowledge, experience, work ethic and plenty of other quantifiable criteria are major factors in anyone’s ability to get a promotion. Still, women who want to move up into bigger roles need to proactively pursue the positions they want.

“Simply thinking about your next promotion isn’t going to get you one,” says Roberta Chinsky Matuson, author of Suddenly in Charge: Managing Up, Managing Down, Succeeding All Around. “To get the attention and support you will need to succeed in your role as a leader, you will need to take responsibility for managing … relationships.”

To get into the roles you desire and deserve, women leaders want to:

The smartest, most qualified people in any organization aren’t always those who get the promotions. But the people who believe they are the smartest and most qualified often do move up (and almost always rightly so).

Confidence helps people recognize issues, find solutions and exceed goals for one reason: They believe they can. So they get promoted because their confidence has helped them overcome obstacles.

Women in leadership who want to be promoted need to recognize their weaknesses and use them as a catalyst for improvement. Find learning opportunities – such as conferences, MOOCs, mentoring and industry events – to strengthen weaknesses, and you’ll boost overall confidence.

2. Ask for the job you want

Matuson’s boss was fired when she was in her early 20s. She likely wasn’t the ideal candidate to fill the boss’ position, but she wanted it. So she asked for it.

“A lot of people in a similar situation would have sat back and waited to hear who their new boss would be,” said Matuson, who was catapulted into the executive suite at 24. “Not me. That decision was a pivot point in my career.

The key to asking for a job you want is to go into the request prepared to show your potential. Remind your bosses of your experience, skills and education. Explain what you’ve accomplished, formal and informal leadership roles, initiatives you’ve taken and risks that have panned out. Share your vision for the role and how you’ll fulfill it.

Managing up isn’t kissing up. It’s about establishing and maintaining professional relationships with your direct boss and other members of the executive team. These four steps are critical:

4. Recognize the right place to be

Working for the right company and people will have some bearing on your ability to reach the career point you want. Some companies and executives value employees’ results and ambitions more than just a résumé.

You don’t want to waste your time and energy trying to get promoted at a company that doesn’t value what you do. Consider: Are people promoted based on time spent on the job or on their successes and potential? Do leaders recognize ambition and give people opportunities to test it? Are people rewarded for results or tenure?

Most women in leadership won’t get the promotions they dream of without some proactive effort. So recognize the positions you want and what you’ll need to do to get them.