You are here: Home / Gender Partnerships / How Gender Bias Affects Your Performance Reviews

Todd and Sarah are co-workers with the same title and duties.

They perform at the same level. Numbers prove that. Their boss feels they both need to improve how they interact with clients.

In Sara’s annual review, the boss notes, “Sarah seems to clam up with she’s with new clients. She needs to be more confident.”

New research shows you – and all women – go into performance reviews at a disadvantage to men.

You’ve probably already felt there are flaws in the annual performance review (for example, they aren’t frequent enough, are too formal and involve a dated, rigid process).

The problems worsen for women. 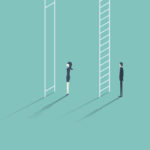 How? Performance reviews are partly, if not mostly, subjective – focused more on what your boss thinks about your work than on the numbers or quality you produce.

That opens the door for gender bias, whether it’s once a year, quarter or week.

Here are the hard facts you need to know. Researcher Paola Cecchi-Dimeglio and author Kim Kleman found that gender bias taints performance reviews like this:

Where the problem starts and goes

If yours is like most organizations, you still use performance reviews (even though they aren’t the most effective way to evaluate and improve performance). And you’ve probably experienced it: Bosses end up recalling high and low points in an over-extended period, then give unclear direction on where to go next.

How to fix it

The performance review process can evolve to eliminate much of any existing gender bias. The more it moves away from the traditional annual performance review to more effective strategies such as crowdsource feedback and ratingless appraisals, the more likely that will happen.

Here are five tips from the researchers to bring gender equality to performance reviews – whether you’re the one being reviewed or giving the review.