You are here: Home / Communication / Give Yourself a Leg Up: 4 Body Language Tips for Stronger Negotiation

You may already be confident with your negotiation skills – but what better way to give yourself a leg up than by backing your words up with bold body language? With a few easy but influential body language tips, you’ll give yourself a competitive edge the other person isn’t expecting.

From meetings to salary negotiations, having resilient negotiation skills come in handy more ways than one. And nothing conveys your authority quite like body language that radiates integrity and confidence.

After all, humans can make over 250,000 facial expressions and more than 2,000 distinct hand gestures. So your actions are going to pack more of a punch than the words you say – just make sure they work in your favor.

Try these powerful body language moves to really get your point across. 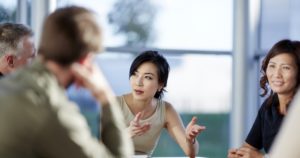 We’ve all said it to a significant other at one point: “And what does that look mean?!” That same thought can come up during negotiations if you aren’t paying close attention to your facial expressions. It’s human nature to wrinkle your forehead when you’re thinking. But it can give off the wrong message and end up working against you.

If you want to look like you’re interested in the topic or really contemplating something, give a slight arch in your eyebrows. Avoid lowering your head, as this can be taken as secretive or shyness. Instead, keep your chin tiled slightly up. Since this move exposes your neck, you’re showing a sense of trust and vulnerability.

Or, if you’re meeting someone for the first time and want to put them at ease, try quickly raising and lowering your eyebrows. This gesture, called the “eyebrow flash” only lasts one-sixth of a second and lets the person know you don’t pose a threat.

There’s just something about eye contact that shows sincerity and conviction. And everyone knows the importance of maintaining it –  but how much is too much? Blinking frequently can come across as aggressive or overbearing, while not enough can convey nervousness.

Aim for the 60% rule. For 60% of the conversation, maintain eye contact while blinking naturally. For the remaining 40%, let your eyes wander elsewhere, such as the document you’re discussing. Remember: It’s OK to look away when you’re thinking or digesting information.

A side note to any squinters: Get to your eye doctor! People tend to perceive squinting as unhappiness or feeling threatened.

Even though it’s been a sign of peace for centuries, 70% of professionals reported they didn’t feel confident with their handshake, according to a Chevrolet survey. Some of the biggest concerns? Sweaty palms, gripping too hard, and not maintaining eye contact.

The survey also found 32% of women never shake hands. There’s a lot to consider: A soft handshake can give off an insecure vibe, while a quick one can show arrogance. But the right handshake can instantly spark trust and comradery.

Luckily, scientists have found the sweet spot: A firm squeeze, with three shakes.

Two other points to keep in mind: Keeping one hand in your pocket while shaking hands with the other is bad etiquette, and shows casualness. So does sitting while shaking hands. As a general rule, keep your other hand by your side as you stand.

Use your limbs to listen

Think about your mannerisms when you’re stressed or nervous. Odds are, you’re tapping your foot, crossing your arms, standing with your legs tightly pressed together, etc. And people pick up on these movements especially during a tense conversation, like a negotiation.

This is especially true when it comes to crossing your arms or legs. Because you appear distant and closed off, there isn’t going to be much room for trust. You’re going to look as though you’ve already made up your mind, and you aren’t willing to budge. So why should the other person?

Having an “open” posture will make others feel more comfortable, and allow an easier conversation to flow. Stand with your legs hip-width apart and your hands down by your sides. If this feels too lax, you can clasp your hands in front of you.

When you want to show someone you’re really listening to what they have to say, put your hand under your chin and tilt your head slightly to the side. As for your legs, point your feet and knees toward the person. This small yet powerful movement shows you’re giving the person your full attention – and hopefully, they’ll return the favor.

Don’t underestimate the power of these small yet influential nonverbal changes – they may just be enough of an edge to drive your point home.