You are here: Home / Leadership Skills / Getting to CEO: How Other Women Did It

Mary Barra, now CEO of General Motors, began her career with the company as a college co-op student. Mylan CEO Heather Bresch literally started out hers on the bottom, typing labels in the basement of the company’s plant. Tricia Griffith, who took over Progressive as CEO July 1, began as a claims rep 25 years ago.

Is being an “insider” the best career path to becoming a CEO? Maybe not anymore. 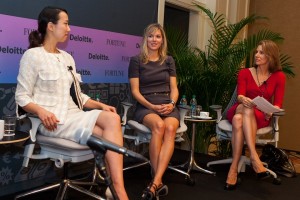 While climbing the corporate ladder is a common path for many female CEOs, things are changing.

Female CEOs are more often hired from outside the company than male CEOs, according to a Strategy & CEO Success Study – a third (32%) of all female CEOs from 2014-2015 were “outsiders” (compared to just 23% of male CEOs).

“That women CEOs are more often hired from the outside may be an indication that companies have not been cultivating enough female senior executives in-house,” says De Anne Aguirre, a Strategy& advisor. “The fact that more companies are considering outsiders might improve the chances for women CEOs in the future.”

Only you can decide whether you’re in the right company to climb – or you need to set yourself on a new “outside” path.

Build your network. Building relationships with male and female leaders in your company, as well as in your industry, is key. “Think about it in terms of being a connector, in terms of being helpful to someone,” says Kate Bensen, CEO of the Chicago Network. “If you really lead your life that way, you’ll find that people think of you and are helpful to you also.”

Make yourself known to a wide range of people to get your name in front of industry leaders. Finding someone high up in an organization to champion your accomplishments can make a big difference in your progress. “Most of my career,” says Sharon Rowlands, CEO of ReachLocal, “I had male champions.” One in particular taught her the difference between “being an operating executive and a strategic business leader.”

Improve your sales skills. There’s been a shift in hiring practices toward CEOs that have a strong sales background. “We are seeing more CEOs from sales and marketing because they have highly developed communication and persuasion skills,” says Al Lewis, director of the Center for Entrepreneurial Management.

Anne Mulcahy, the former CEO of Xerox, began her career as a field sales rep.  “In sales, you quickly learn if you have what it takes – or not,” says Sharon Rowlands. “In short order, you must learn to hire the right people and help them develop their skills, to set goals and to appraise people correctly.” If you don’t develop those talents, you won’t succeed as a CEO, she says.

Say yes to the mess. Think about taking on those unpleasant assignments that others have passed up. “Take the worst, the messiest, the most challenging assignment you can find,” says Angela Braly, CEO of WellPoint, “and then take control.” Once you do, others will take notice. “I have stepped up to many ‘ugly’ assignments that others didn’t want,” offers Beth Mooney, KeyCorp’s CEO.

Whether or not you take the long-tenured, insider path to the C-Suite, the need to prove yourself in multiple roles in an organization is key to ascending to top leadership.