You are here: Home / Women in the World / Equal Pay—Does the Age (of Your Career) Matter?

Recently, you might have seen news that would normally be fodder for Variety become a focus on CNNMoney: Actress Robin Wright, who stars in Netflix’s “House of Cards,” demanded producers make her salary-per-episode equal to that of her co-star Kevin Spacey.

“I want to be paid the same as Kevin,’” she said in an interview with The Huffington Post. “I was looking at the statistics and [my] character was more popular than [Spacey’s] for a time. I [said], ‘You better pay me or I’m going to go public.’” 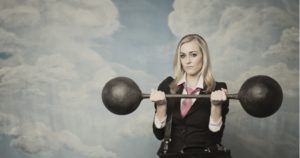 One could argue that Spacey, winner of two Oscars as well as a slew of other trophies, is slightly more “qualified” than Wright, who’s been nominated but has less award clout than he does.

Wright noted that putting her career temporarily on hold to raise a family (her two children are in their 20s) put somewhat of a halt on her earning power.

“I’d [stopped] building my salary bracket. And if you don’t build that, you’re not in the game anymore … You don’t hold the value you’d have held if you had done four movies a year … I’m kind of on a comeback at 50 years old.”

This made Wright’s equal-pay argument even more compelling. You don’t have to be in show business to understand her situation, as it happens to women across all career paths.

In her book Creating a Life: Professional Women and the Quest for Children, Sylvia Ann Hewlett points out how hard it is—and in some professions might be close to impossible—to “off-road,” as it’s sometimes called, during an early stage of one’s career and expect to catch up later.

“The persistent wage gap between men and women is due mainly to the penalties women incur when they interrupt careers to have children,” Hewlett says. “Only a small portion of this gap can be attributed to discrimination (getting paid less for the same job or being denied access to jobs) … a large part can be explained by child rearing, which can permanently depress [women’s] earning power.”

Emphasize What You Bring

Most successful women leaders do accept the fact that leaving their careers for a time could set them back from men with regard to “time served” in their field, plus missing out on promotions or key career moves. That makes the efforts we put behind our work that much more critical.

When approaching the powers that be for equal salary, it could pay (in more ways than one) to toot your own horn and focus on “justified” rather than “equal” pay. Make your accomplishments the focus, not what your co-stars might be earning.

Wright pointed out that she and Spacey get even screen time and plot lines, and referenced viewer stats that supported the popularity of her character. Rather than focus on awards or how long she’s been working, Wright won her equal-pay argument by wisely pointing out what she brings to the show to make it successful—and making sure her producers knew she was just as responsible for the show’s success.