You are here: Home / Leadership Skills / Embrace ‘Singletasking’ As a Leadership Strategy

For most women leaders, that age-old concept of “killing two birds with one stone” often ends up in an avalanche of rocks under a flurry of feathers.

It’s not that we can’t manage several projects at once—we know a thing or two about prioritizing and organization skills. But that isn’t really what multitasking is anyway; it’s trying to focus on too many little things that require our attention at the same time. 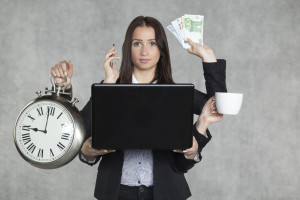 Which is why we should let the idea of “singletasking” take over—the effort not to do several things at once. Not only will we be able to actually get stuff done, we can also lead by example and show that concentrating on one thing at a time is a sign of a superior work ethic.

The best part is, we really don’t need to multitask. And once we stop doing it, we’ll see how easy it is to avoid.

Because we’re so organized, it’s easy to take on a lot at once. Couple this with a hesitancy to delegate, and it could lead to a perfect storm we didn’t see coming of too much to do in too little time. (See our previous post on delegating).

We’re used to getting things done quickly, so when we’re confronted with a detour or unforeseen added work, our first reaction is to double up.

Multitasking cuts our productivity by as much as 40%, according to Devora Zack, author of the book Singletasking: Get More Done–One Thing at a Time. We may think we’re getting a lot done, but all we’re really doing is switching (inefficiently) between activities.

“Singletasking obliges you to [focus on] one thing at a time, excluding other demands at that moment,” Zack told Inc.com. “This means you must stand firm and genuinely commit to your choices.”

Here are some easy ways to start adopting singletasking as your workplace way of life, courtesy of Lifehacker:

Learn from the Amish. Most people assume these farm dwellers totally avoid technology. But that isn’t true: They just use as little of it as possible to get work done. Do you really need to scan the web while you’re writing an email? Can you ignore your IM for an hour? All those “tools” actually sway your thinking that you’re getting three things done at once when, in reality, you’re relying on them for distractions.

Glance at a clock every once in a while. (We know, it’s weird! Our phone alarms tell us what time it is!) Paying attention to the time can help us focus on doing one thing at a time. Set little “clock hand” goals to keep track of what you’re doing and when. As in: When it says “10 minutes to…”, make it a point to stop what you’re doing, stand up and stretch a bit. Then decide if you absolutely need to move on to another task. If not, keep plugging at the one you’re already doing.

Get everyone else in on your plan. Be up front about your singletasking idea. If your co-worker asks you why you didn’t respond immediately to an email, tell the truth: You closed your mailbox to give 100% of your attention to a project on a deadline. People might be wary at first—we’re so used to multitasking we don’t even know we do it.

How a Singletasking Focus Helps Us Lead

Resisting the urge to multitask sends a positive message to your team as well. Women leaders can and should set the tone for our working environments. If co-workers and those who work for you see how you manage your workload in a focused manner, your actions will influence the pace of how others work.

After a while, there’ll be a snowball effect—employees and coworkers will catch on and be more likely to imitate you. The result is a more efficiently run office or department, and a less stressed-out team to lead.

How do you cut away and focus on one task at a time? Share your tips in the comments section!