You are here: Home / Leadership Skills / Effective Negotiating: Why Women Have an Edge

Meet people where they are. That should be your motto to approaching any negotiation situation, says Beth Fisher-Yoshida, PhD, CCS, Columbia University Director of the Negotiation and Conflict Resolution program.

We negotiate something every single day, even if we don’t realize we’re doing it, Dr. Fisher-Yoshida reminds us in an article published in Psychology Today. While women are just as likely as men to prepare for negotiations, if the negotiation doesn’t go according to plan, women can “feel like a deer in headlights.” 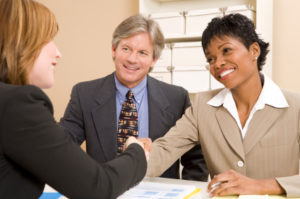 Being stuck in one of those uncomfortable moments can cause us to back away, Dr. Fisher-Yoshida adds. Once self-doubt sets in, we’re less likely to negotiate successfully, because emotion can take over and cloud our once-sound argument.

The plus side is women have a natural knack for employing relational negotiation when it comes to getting what we want. It’s defined as a way of using interpersonal connections to set the tone for future negotiating.

Progressive Women’s Leadership (PWL) spoke recently with Dr. Fisher-Yoshida to discuss the concept of relational negotiation and how women leaders can use innate tendencies to build solid relationships when we negotiate.

PWL: Your approach is that women more often use relationship-building to strengthen their hand when negotiating. How can more women in leadership tap into this?

Beth Fisher-Yoshida: A large part of negotiating involves mining information from people. And while you should definitely come in prepared, you also have to be able to anticipate people’s reactions—and I think women are more cut out to recognize what’s important to those we negotiate with.

As with any kind of negotiation, there’s risk involved. Both parties usually expect to gain more out of the negotiation than the other party. So going into it, it’s best to operate as if you understand you might not get all of what you want. It’s a give-and-take.

PWL: You say negotiation isn’t just about what’s being negotiated, but also about the link between negotiators, and that this has serious implications for the success of any negotiation.

BFY: You’ve got different dynamics in the workplace, obviously. And nothing negotiated is ever a one-time [deal]. You’re probably going to encounter the person you’re negotiating with again for something else. So you have to approach it in the context of more than a possible short-term gain.

On the flip side, you have to make sure you’re not the only [party] who’s being flexible. We have to be careful not to over-extend ourselves, just like in personal relationships. Going overboard [for the negotiation] can derail the outcome.

PWL: How would you illustrate this?

PWL: Many women leaders find it difficult to ask for what they want. Do you have advice on how to overcome negotiation discomfort?

BFY: I do think preparation is critical. Many of us think we know enough about what we’re negotiating, so we wing it—and we’re caught off-guard. Have a scenario worked out in your head. A lot of things can happen when we communicate, but at least you’ll have mentally gone through the process.

Good negotiation is really a way of bargaining. There’s an expectation it will be a win-lose—someone will get what they want and someone else won’t. But when we approach negotiating at the outset with the possibility of a win-win, it becomes more relational.

PWL: In your opinion, what’s the one thing most people get stuck on when negotiating?

BFY: I’d say the lack of ability to really understand the other party [in the negotiation]. Many women who are very smart and talented at what they do lack the people skills to read others. In negotiating, it’s important to meet people where they are.

PWL: How can women use relational tools to overcome it?

BFY: Our mindset going into it shouldn’t be one of confrontation, but on being open-minded. We should understand what people are looking for but not lose our authenticity. Be accommodating, but use communication strategies that are true to you.

So how do we strengthen our negotiating power? Dr. Fisher-Yoshida suggests using these steps to develop relational negotiation “muscles” to better prepare for when you need to negotiate:

Have an example of how you used relational negotiating? Share in the comments section!