You are here: Home / Gender Partnerships / Closing the Gender Pay Gap: What Every Woman Can Do

Remember when actress Patricia Arquette made an impassioned speech about “equal pay for equal work,” when accepting her Academy Award last year?

Well, she put her money where her mouth is, now as executive producer of a new 90-minute documentary called Equal Means Equal, which is about the gender pay gap and other issues with which women struggle today. (Equal Means Equal is now available on iTunes, Amazon, Google Play and other digital platforms, and is accessible for private screenings.) 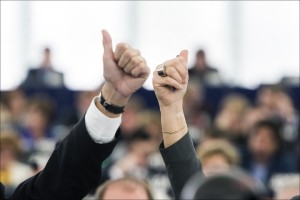 Patricia Arquette has used her celebrity status to bring attention to a new Congressional report on the pay gap, which found that a woman working full time, year-round, earns $10,800 less per year than a man, based on median annual earnings. This adds up to nearly a half million dollars over a career.

The gender pay gap has persisted across all levels of jobs in the workforce. Women are earning about $.79 for every dollar men make (by comparison, it was $.59 cents in 1963).

“Women have been fighting for equal rights for 227 years, and at this point now we’ve reached a breaking point,” Patricia said recently on MSNBC’s Andrea Mitchell Reports. The actress, who also appears in the Equal Means Equal documentary, says she’s been somewhat encouraged by recent moves towards pay equity in the private sector, like the White House Equal Pay Pledge.

So far, 50 influential companies have taken the pledge to conduct internal analyses and ensure men and women are being paid equally, “but there are many others who will refuse,” she said.

Some of the companies on board include Facebook, Apple, CVS, Deloitte, Johnson & Johnson and Cisco, for example, which has designed a pay parity framework that uses analytics to proactively monitor, intervene and minimize pay disparities. (You can find more information on what individual companies are doing to achieve pay parity here.)

Closing Your Own Gender Pay Gap

Now, let’s explore what you can do to close the pay gap for yourself – and other women – no matter where you work.

Improve your negotiation skills. Many studies reveal that men are better negotiators, including a new Glassdoor survey, which reports that men are three times more likely to be successful in getting a higher salary. Remember, salaries are always negotiable no matter what a prospective employer tells you, says Katie Donovan, founder of Equal Pay Negotiations, a consultant firm that works with employers and employees to achieve equal pay. One of the most effective tactics when negotiating a salary for a new job is to be silent, after asking for a particular salary, says Katie, who says to “give the other person a chance to respond.” Before any salary negotiation, know the market rate salaries (from Salary.com or payscale.com, or trade associations) for your job, as well as an employer’s financial state, so you can respond to a salary shutdown with something like, “That’s surprising, your company had record high sales last year.”

Pick the right time to ask for it. If you’ve decided that you deserve a raise, think about the timing. It’s best to negotiate when you’ve been praised for your accomplishments or when your company is on an upswing. Then you need to frame the request on how what you’re achieving is adding value to the company. In other words, what does the company get out of giving you more money? Be “relentlessly pleasant,” advises Mary Sue Coleman, president of the Association of American Universities. Smile frequently, show appreciation, express concern for company challenges and emphasize larger goals, she recommends.

Challenge your employer. Women in management roles can – and should – confront their employers if a pay disparity exists. “Two female employees at Salesforce challenged their CEO, Marc Benioff, and he accepted the challenge,” says Jay Newton-Small, author of Broad Influence: How Women Are Changing the Way America Works. He found disparities amongst his 17,000-person workforce and increased wages by $3 million annually. “It’s only by shining a light that problems come to the fore and can be fixed. And in this instance, all it took was two women to make a difference,” says Jay.

Know the rules. You have the law on your side. President Barack Obama has recently introduced the Paycheck Fairness Act (now before Congress), which would require companies with over 100 employees to report how much they pay their workers based on race, gender and ethnicity. In 2009, he signed the Lilly Ledbetter Fair Pay Act, which allows employees to file lawsuits regarding equal pay for up to 180 days after a discriminatory paycheck (and resets after each discriminatory paycheck.

If progress continues at the current rate, the gender wage gap is not expected to close until 2059, according to the new Congressional report. If it only took two women at Salesforce to make a $3 million difference at their company, this begs the question, “What can each of us do to affect change at our companies?”