You are here: Home / Leadership Skills / ‘Change-Agent’ Moves That Will Make You Stand Out

You’ve gotten word that there’s an opening for an upper-level management position—and you know in your gut you’d be right for the job.

But, unfortunately, so would many others you work with. So how do you stand out?

For women in charge, it’s critical to sell our ability to be agents for change. We’ve got a more challenging path to the top in most fields than do men. And if the current business climate is any indication, the ability to affect change is the No. 1 sought-after quality for entry to the C-Suite. 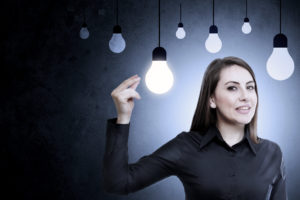 So it’s vital to turn a spotlight on not just what we bring to a table, but what we can add to it.

Being a change agent really means you’re open to exploring innovative and often untested approaches. You’re willing to entertain what might seem like radical moves to reach greater success heights. You’re a smart risk-taker, not impulsive. And you’re willing to put yourself at risk to some extent, because you can embrace change and the uncertainty that comes with it. This will get you respected on a higher level.

Being open to change will pay off for career success in the long run, according to successful women leaders who helmed a panel discussion during the Pennsylvania Conference for Women held this past October.

Decisive actions we take to shake things up often make a lasting impression, says Courtney Lynch, one of the panelists who’s a leadership expert and co-author of Spark: How to Lead Yourself and Others to Greater Success. “About 30% of our ability to lead is [innate]; but 70% comes from us choosing to lead.”

The panel shared some of the change-agent behaviors they used that helped them grow in their careers. See if you’re doing some of these already, and if not, it might be time to rethink your approach.

Change the corporate safe-talk to pointed, frank discussion when it’s needed. Employees tend to adopt our wariness if they sense we fear or want to avoid change. “Embrace what I call ‘radical candor’—it’s a hallmark of great leaders that people know where you stand,” says Aria Finger, CEO of DoSomething.org. “Leadership is about letting people know what you want and need from them.”

Allow other people to do stuff.

Change only comes about through a lot of trial and error. Give people real opportunities that involve risk; it lets them know their worth and helps them embrace needed changes. “Put people in positions to take risks, so not only are they taking a chance, so are you. Failure has to be allowed to happen,” says Linda Dillman, Chief Information Officer for QVC.

Change your perspective by letting others lead while you follow up. If you sense old techniques aren’t working, “slow down and look behind once in a while. Are your fast-paced actions pulling people or pushing them forward? Don’t get so far ahead that you lose that connection,” says Nina Tassler, retired Chair of CBS Entertainment.

Create a culture of servant leadership.

“The idea of servant leadership sounds like an oxymoron, but it’s how your employees see you working for the overall success of your team,” says Finger. Put yourself in the trenches with employees. Doing work alongside them for an important project or a new venture shows that you appreciate what they do—and you’ll be a manager other employees envy.

Start demanding feedback if you don’t get it.

Getting regular, honest feedback is key to making changes: If you’re never sure what’s working and what isn’t, you can’t make needed changes before it’s too late. Don’t let co-workers get away with a smile and nod. “I ask everyone if they were me, what would be the one thing they’d change and the one thing they wouldn’t. It forces them to answer,” says Dillman.

Above all, show confidence—even when it’s hard.

Change your outlook on how you cope with hard times, and it will change others’ thinking, too. We send a powerful message when we don’t allow failures to get the best of us. “The more successful we become, the more inadequate we might feel,” Lynch points out. “We know we’re fallible. But if we project confidence, we’ll feel more confident.”

What’s one change influencer you’ve used to some success in your career? Share in the comments section!