You are here: Home / Featured Home / Will this be what it finally takes to get more women in senior-level positions?

Tough to put a woman in a senior role at a company when there aren’t even any in the running!

That’s the thought behind accounting giant PWC’s recent move to ban all male-only short lists for senior jobs at their firm’s UK division.

It’s a bold move for the company, but an increasingly common one. More and more employers are recognizing the need to include female candidates in their “final four” or “final three” hiring choices.

Here’s how it’s playing out for PWC and how you might adopt it at your own company, whether formally or informally.

More to it than that 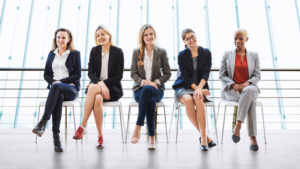 Of course, the goal is still the same: to secure the best person for the job.

But with the firm’s gender pay gap at a staggering 43.8%, the firm knew it had to take dramatic steps to even the playing field a bit.

By taking a long hard look at how these most coveted positions are earned and then adding safeguards to make sure there’s representation among finalists, the hope is that it will become more and more commonplace to see women in these final rounds of interviews and ultimately assuming these roles.

Bringing it to your own organization

Maybe your own company will institute a policy like PWC’s. Maybe it already has. But even if you’re not there yet (or anywhere close), there are ways you, as a woman leader, can incorporate some of these practices yourself.

The easiest one to tackle? Interviewers. It’s always a great idea to have both male and female supervisors and/or HR pros interview candidates. Each can bring certain strengths and insights that will give you the best assessment of who the perfect fit might be.

Women especially, who tend to be higher in emotional intelligence, can be extremely valuable in evaluating candidates. Not only will they bring their own EQ into their interactions, but they can be a great gauge of how much EQ that person possesses. And study after study confirms EQ is one of the leading predictors of success in today’s workplace.

Also, when sifting through resumes, try wherever possible to highlight the qualified female candidates in the pile and make it a practice to bring at least one of them in for a closer look.

As more and more women make it to the short list (even if it is with the help of policies like PWC’s) more and more of them organically will start appearing on those lists.

And that will start raising the numbers of women in those senior-level positions.

What do you think? Will PWC’s new short-list policy help women in the workplace rise to those coveted senior-level spots? Tell us in the comments section below.