Last summer the world watched as Carli Lloyd propelled the U.S. women’s soccer team to victory with her hat trick in the World Cup finals. But it was anything but easy to get there.

That’s what she told me, along with 8,000 other women at the Pennsylvania Conference for Women in Philadelphia last month. 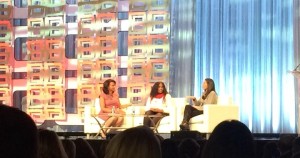 Carli kept the audience rapt in their seats as she explained what it took to get that World Cup gold medal around her neck … and to keep charging toward her next goals winning her third Olympic gold and second World Cup title.

And the lessons the soccer team’s unofficial leader shared apply to all women, but especially those who’ve already achieved some success.

Here’s what you can take from her ongoing quest for greatness:

Of course a world championship is any athlete’s dream. But that’s not enough for Carli. And it shouldn’t be enough for you, no matter what success you’ve already enjoyed as a leader.

Instead you want to cultivate what she called a “productive restlessness” that will keep propelling you forward on to bigger and better goals. 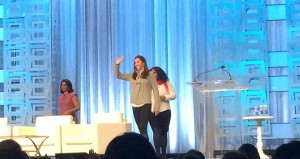 Carli trains both body and mind to prepare for that next big game. That includes putting in the hours even on Thanksgiving and Christmas mornings. After all, chances are no one else is, which gives her a competitive advantage.

Do something every single day that betters yourself and pushes you closer to your goal. Even if that’s simply spending 10 minutes reading an industry journal or brushing up on your communication skills, you’re still training. And that will become your competitive advantage.

Lesson 3:  Be willing to work on your weaknesses

When an already-successful Carli Lloyd switched to a new trainer, he was quick to point out a laundry list of weaknesses in her game. She could have easily decided to downplay those shortcomings and focus on her sizeable strengths. But Carli did just the opposite: She actively worked on her weaknesses, transforming them into strengths.

Think about what bosses, co-workers and mentors may have ID’d as shortcomings in your “game.” Of course the natural instinct is to steer clear. Instead commit to working on those weaknesses until they too become your strengths.

Carli’s parting advice: As you put in the time and effort to achieve your goals, be careful not to dwell on things you can’t change.

Carli has hit plenty of plateaus and setbacks in her soccer career. But she’s worked hard to not harp on the negative things that inevitably can – and will – happen.

No one’s career trajectory is straight up. Wasting time on bumps you can’t do anything about distract you from your goal and keep you from being the leader you can be.

Carli’s eye remains on the prize and by learning from her experiences so can yours.